Ireland has secured the 2018 GolfSixes with a 2-0 victory over France in the final after putting on a brilliant display on day two at Centurion Club. Gavin Moynihan partnered Paul Dunne to victory in a stunning display of golf with the Irish pair making three birdies and an eagle in the space of five holes to beat France’s Romain Wattel and Mike Lorenzo-Vera.

Earlier the Irish overcame the England Women’s team of Charley Hull and Georgia Hall 2-0 in the quarterfinals of the six-hole matchplay event, then beat South Korea in the semifinals, with Moynihan chipping in for a birdie on the first playoff hole. 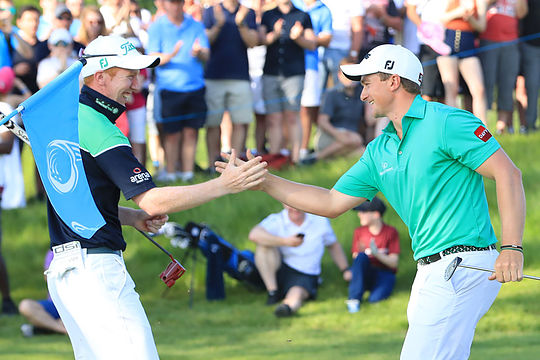 “It’s unbelievable,” said Moynihan. “It’s been a great week for both of us. To get it done today means a lot when you’re representing Ireland. The course set up well for us and we had fun. It was the best fun I’ve had on a golf course since turning professional and a great few days.”

“Our flight’s in two hours so we’re not making that, so we’ll be booking a new one for tomorrow with probably a hangover!”

This is an unique tournament format where sixteen teams, a mixture of men and women, play-off for eight qualifiers from four round-robin groups. Then, on Day 2, straight knock-out using the greensomes format (both players tee-off on each hole, choose the best of the two, then straight foursomes thereafter) was used over each of the six-hole matches.

In the third/fourth place play-off, the South Korean pair of Soomin Lee and Jeunghun Wang birdied the second, fourth and fifth to beat Australia 3-0.