Korda’s team included Karolin Lampert, Lina Boqvist and amateur Alexandra O’Laughlin. The four combined to reach 41-under in the 54-hole team event that carries points for World Rankings and the Race to Costa del Sol, a season-long race that determines the LET’s top golfer. 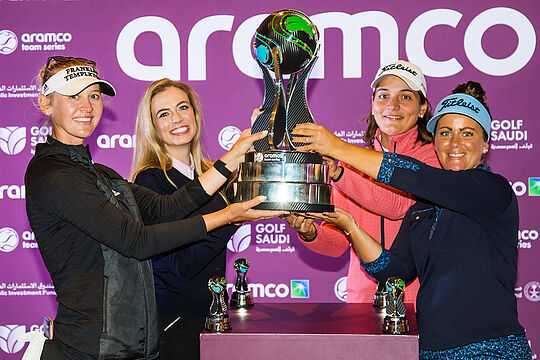 In the playoff, Popov and Korda both played the 17th hole under lights, first tieing with bogey each before Korda won it for her team.

“It is so nice to share this win with a team. It’s such an individual sport so this is different and really cool,” said Korda.

“Today we really came together, and it was one of our best days, especially on those last six holes. We were just having fun, hyping each other up.”

The first event of its kind on any professional tour, the Aramco Team Series sees professionals and amateurs compete together. It takes place over three rounds, with two of four scores on each hole counting towards the team score, while the pros also vie for the individual trophy.

Each team consists of three professionals and one amateur.

In addition to the team competition, the Aramco event also included an individual leaderboard. England’s Charley Hull finished at 12-under with an impressive final round of 65 and topped 36-hole leader Jessica Korda for her first win since 2019 and her third LET victory.

Jessica Korda, who led after the second round, finished in second place on 11-under after carding a round of 70 with fellow American Danielle Kang in third place on 9-under-par.