Davis Love III and Dru Love closed with a 16-under 56 in a scramble format to set two tournament records and win the PNC Father-Son Challenge by three shots on Sunday.

Team Love shot 27 on the front nine at The Ritz-Carlton Golf Club, took the lead with a birdie at No. 11 and finished off the record round with four more birdies and an eagle.

John and John Daly Jnr. shot 62 and tied for second with Retief and Leo Goosen and Stewart and Connor Cink.

The 36-hole event is for players who have won a major or The Players Championship and their partner cannot hold a PGA Tour-sanctioned card, something Dru, 24, who currently has no status is hoping to achieve at some point in 2019. 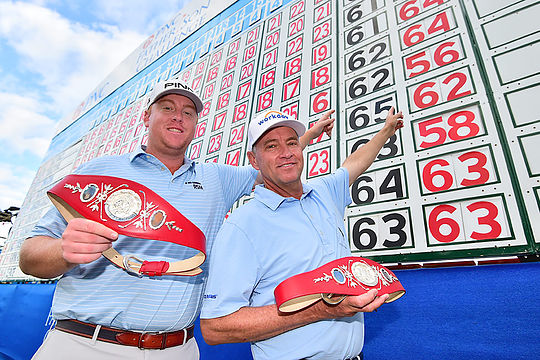 Love III still competes on the PGA Tour whilst Dru is pursuing a PGA Tour career and already has played in 14 tour events and made the cut in three of them.

“My dad said let’s finish this one off because hopefully it’s our last one,” said Dru. “I’m hoping to play my way permanently onto the Tour and this is a great start towards that.”

This is an event that gets attention more so for who can follow in the father’s or grandfather’s footsteps than anything else. There were solid performances from the Goosen’s and the Daly’s and their 15-year-old sons, as well as Jack Nicklaus and his 16-year-old grandson, GT Nicklaus.

Retief and Leo Goosen also fired on the course, shooting a 13-under par 59 on Sunday. Leo plays to a 0.1 handicap index at Isleworth Country Club in Windermere, Florida.

John Daly Jnr. plays to a +0.9 handicap index at Bishops Gate in Howey-in-the-Hills, Florida and was booming his drives in similar fashion to his dad. Whilst GT Nicklaus the 16-year-old grandson of the Golden Bear, who first gained notice with his hole-in-one in the Par 3 Contest at Augusta National this year, plays to a +3.3 at the Bear’s Club in Jupiter, Florida and was equally impressive with a deadly short game coupled with solid driving.

Team Love also won the event in 2012. Dru Love last played on the PGA Tour last month in the RSM Classic at Sea Island. He tied for 54th, finishing just ahead of his father for the second.