Justin and Mike Thomas delivered a birdie barrage on the final day of the PNC Championship to card a 15-under 57 finish in the scramble format for a one-shot victory over Vijay Singh and his son, Qass. 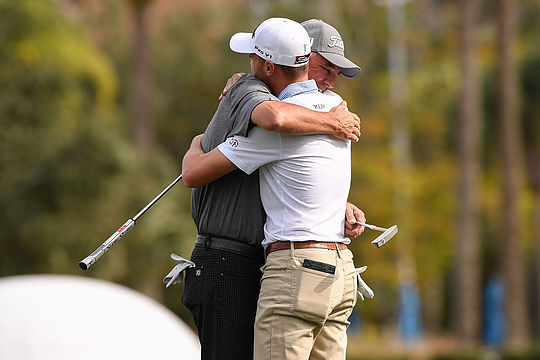 Justin and Mike Thomas hug after their win on debut at the PNC Championship (Credit: PGA Tour)

Thomas, who has multiple PGA Tour titles in each of his last four years, said the focus for him wasn’t on the money or a trophy.

“A part of you didn’t care who won,” remarked Thomas. “We were here as father and son to enjoy a special moment.”

This event also had the added dimension of the first “public” appearance of Team Woods – Tiger Woods and his 11-year-old son, Charlie.

The pairing would eventually finish seventh, yet all eyes were on Charlie’s swing and the unique mannerism, which strongly resembled his famed father in his prime.

Charlie, the youngest competitor in the tournament’s history and perhaps its most anticipated, showcased impressive form and on several occasions looked every part his father as he worked his way around the course.

Arguably Charlie’s best shot of the tournament was a five wood off the fairway from 153 metres that bent around to the left to finish a metre from the hole resulting in an eagle. There were plenty more which kept golf fans watching in awe.

“I don’t think words can describe it,” 15-times major champion Woods said of competing alongside his son. “Just the fact that we were able to have this experience together, Charlie and I, it’s memories for a lifetime.”

The PNC Championship has the longest waiting list in golf, with plenty of Tour regulars wanting to tee it up and experience the joy of playing against each other with their siblings. Newcomers to the field this year included Woods and Thomas, Bubba Watson and Mark Calcavecchia.