Victorious at the Walker Cup two years ago at Royal Liverpool Golf Club, the USA needed to earn 6 out of an available 16 points on Sunday to retain the cup, while Great Britain & Ireland needed to take 8½ points to claim their first Walker Cup win since 2015. It was the eighth consecutive time the USA Team had led after Day 1 when playing at home, seven of which resulted in overall victories. 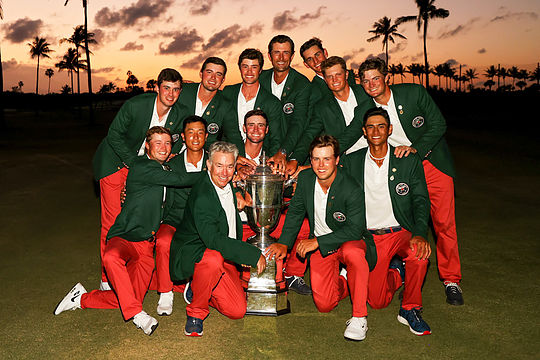 USA entered the final day with a 7-5 lead, which was trimmed to 8½–7½ after the GB&I Team took 2½ out of 4 points in the morning foursomes session.

The ten afternoon singles matches would therefore decide the first Walker Cup Match played in Florida, and the final result was in doubt for most of the day. The USA then managed to get a 5 ½–4 ½ advantage in those matches to retain the cup. It has been two decades since the GB&I Team has won on US soil.

“It was such an evenly matched contest and our guys were really fired up,” said USA captain Nathaniel Crosby. “I’ve been blessed to be part of their lives here for a few years and it’s been so great.”

Stuart Wilson captain of GB&I, was equally complementary about his team, despite the result.

“It’s been a great weekend of golf,” said Wilson. “It’s the Walker Cup after all. The guys have come out fighting and tried to equip themselves as best they can. But hats off to the USA Team and Nathaniel for pulling the victory off.”

Whilst this is a team event there were some impressive individual performances from the USA line out.

Cole Hammer from the University of Texas, playing in his second Walker Cup, notched a 3-0-1 record and clinched the vital 13th point for the USA, enough to officially retain the Walker Cup. Stewart Hagestad, Pierceson Cody and Austin Ecroat also won their afternoon singles matches along with Ricky Castillo.

This was the first Walker Cup in the US played in the spring. In 2023, it will resume its typical early-September timeframe, with the 49th Walker Cup Match scheduled for Sept. 2-3 at the Old Course in St. Andrews, Scotland.

In 2025 the tournament returns to the US at Cypress Point Club at Pebble Beach.