Team USA dominates on day one of Presidents Cup

It was a tough opening day at the office for the International Team at the Presidents Cup with the USA dominating the foursomes matches to take an early 4-1 lead in the biennial tournament.

Following a three-year COVID-induced hiatus and battling the fallout from LIV Golf defections, it was always going to be a struggle for the rest of the world team at Quail Hollow Club especially with the loss of World No.3 Cameron Smith and Chile’s Joaquin Niemann. 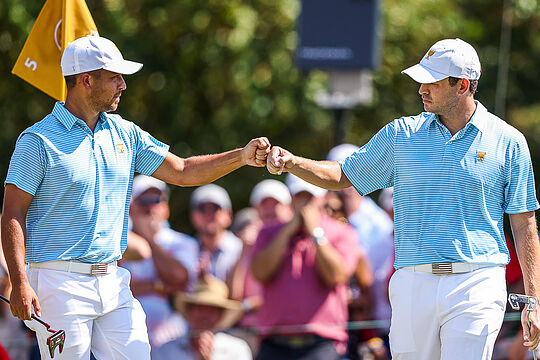 Adam Scott and Hideki Matsuyama kicked off the proceedings playing against Patrick Cantlay and Xander Schauffele but it didn’t take long before the cracks appeared.

A birdie at the third followed by another three between the 5th and 7th holes saw Cantlay and Schauffele go 4up at the 7th hole before a birdie from the Internationals steadied the ship before the turn.

However, the news didn’t get any better on the back nine with Cantlay and Schauffele quickly regaining lost ground at the par 4 11th to move back to 4up. Two more birdies at the 12th and 13th wrapped up the opening match 6&5 to the Americans.

Schauffele and Cantlay remain unbeaten as a foursomes team at both the Ryder and Presidents Cups.

Match two was a much closer affair. Jordan Spieth and Justin Thomas got off to a hot start with three birdies between the third and sixth holes before the team of Sungjae Im and Corey Conners combined for two birdies before the halfway mark to reduce the deficit to just one.

From there, it was pars all the way until the par 4 15th where Spieth and Thomas combined for an unlikely birdie that was enough to get them to a match-winning 2up.

Australia’s Cam Davis and Si Woo Kim managed the only points of the day after pulling off an impressive 2up win over World No.1 Scottie Scheffler and Sam Burns.

The Americans cruised through the opening nine with four birdies against two from the Internationals. However, it was a very different story on the way back to the clubhouse with Davis and Kim sinking four unanswered birdies from the 15th to 18th holes for an impressive win.

In other matches, Cameron Young and Collin Morikawa defeated Tom Kim and K.H. Lee in another close match that wrapped up on the 17th hole, 2&1.

In the fifth and final match of the day, Tony Finau and Sunday’s Fortinet Championship winner, Max Homa, clinched a narrow 1up win over Taylor Pendrith and Mito Pereira.

Play continues tomorrow with the Fourball competition where Aussies Adam Scott and Cam Davis will go up against Jordan Speith and Justin Thomas in the opening match of the day.