Team USA give masterclass in scrambling at World Cup

If ever there was a lesson in how to eke out a score on a difficult day, Americans Rickie Fowler and Jimmy Walker gave their playing partners Australians Adam Scott and Marc Leishman a masterclass on the subject on a blustery first day of the ISPS HANDA World Cup of Golf at Kingston Heath.

In the foursomes (alternate shot) format, the American Ryder Cup duo fashioned a 2-under round of 70 that at various points might have looked to have been a lot worse but for their tenacious scrambling.

“We got everything out of the round that we could have. Rickie hit it great, hit some good shots. It was an all-around effort I think,” Walker said.

By comparison, the Australians were rarely able to get anything going with their wedge play and putting and signed for a 2-over par 74. Only six teams were able to post sub-par scores as swirling winds played havoc with club selection. 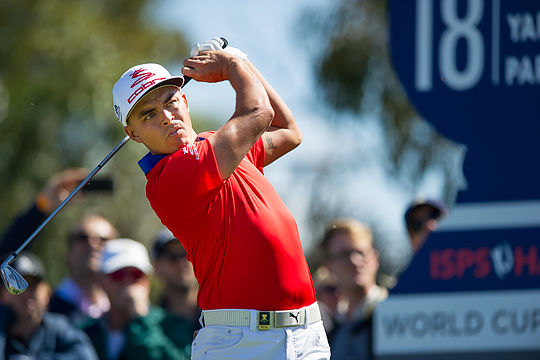 The Americans were bunkered on no less than seven occasions, all of which fell to Walker, and his work from the sand was complemented by Fowler’s par saving putts on many occasions.

Standing at even-par on the par-four 13th, Fowler was short with his approach but Walker was able to turn the tide in their favour by holing the bunker shot for birdie.

“(The bunker shot) got us kind of jump started a bit to go make two more after that and that was kind of the fun part of the round, for sure,” Fowler said.

A bogey at the difficult 16th dropped them out of the outright lead but they remain well positioned in a tie for second with China and France, a stroke behind the Spanish pair of Rafa Cabrera-Bello and John Rahm, who birdied the last to take the outright lead.

Following their press conferences, Fowler and Walker were treated to a Thanksgiving feast, Australian-style, in the clubhouse and commented on the family celebrations that they’re missing by being Down Under at this time of year.

Missing Thanksgiving has been a sacrifice they have been prepared to make with both players determined to end their years on a high by taking the Cup back to the States.

“We didn’t come all this way down here to run second, that’s for sure,” Walker said.

Round two’s Best Ball format begins on Friday from 8.28am with Australia’s Scott and Leishman paired with Canada’s Adam Hadwin and David Hearn at 9.10.