The Internationals started Sunday committed to ending a 21-year winless drought at the Presidents Cup yet the Americans proved too much again, dominating the singles matches to easily secure a 16-14 victory for their eighth successive win in this biennial competition.

Ernie Els’ side held a two-point lead heading into 12 Singles matches at Royal Melbourne but could not withhold the American powerhouse led by Tiger Woods, with the 8 points earned by the US in a singles session the largest move in the history of the tournament.

Woods sent himself out in the first match and set the tone, accounting for Abraham Ancer, 3&2, and in the process surpassed Phil Mickelson’s Presidents Cup record for most victories with 27. Woods also recorded a perfect 3-0 winning record for the week. 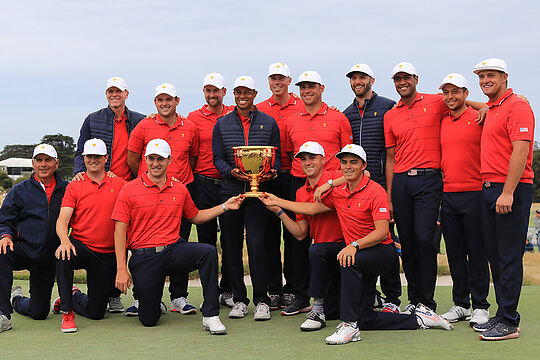 The second match also hurt the Internationals as Hideki Matsuyama threw away a four-hole lead to tie against Tony Finau. Then the Americans made their move with Patrick Reed winning 4&2 over C.T.Pan and Dustin Johnson accounting for Haoting Li to see three of the four matches falling into the Americans’ hands and not a single match to the Internationals.

It was the perfect start the Americans needed to erase the overnight two-point deficit and swing the momentum towards Team USA.

Former world number 1 amateur, Patrick Cantlay, was in a titanic battle with Joaquin Niemann over the opening nine as the lead alternated between the two. On the 11th, Cantlay then applied the pressure reeling off a string of birdies to win four of the next six holes for a 3&2 victory.

Xander Schauffele took a 4-up lead to the turn against Aussie Adam Scott and it looked as if the Americans were primed to take this match with ease. Scott showed some fight down the stretch, but effectively ran out of holes, eventually going down 2&1.

Webb Simpson entered his singles match with a 0-3 record but his late victory over Byeong-Hun An was the 15th point for the USA, meaning they needed just a half point to win the cup.

Aussie Cameron Smith secured an impressive 2&1 win over Justin Thomas, but it proved to be too late and when Matt Kucher drained a birdie putt on the 17th in his match against Louis Oosthuizen, the Cup was to remain in American hands with Kuchar earring at least a half. The match of Rickie Fowler and Marc Leishman became a dead rubber and ended in a half.

The American onslaught was relentless over the weekend with the star-studded team secured 11 from 16 points from the last two sessions in arguably the best comeback in the tournament’s history.