Final day controversy and some incredible golf from the US team were the ‘highlights’ of a dramatic final day, as the Solheim Cup returned to American hands for the first time since 2009.

A rain-delayed finish to the Day 2 four balls at the St. Leon-Rot Golf Club in Germany were the catalyst for scenes that will be long remembered in women’s golf history for largely the wrong reasons. 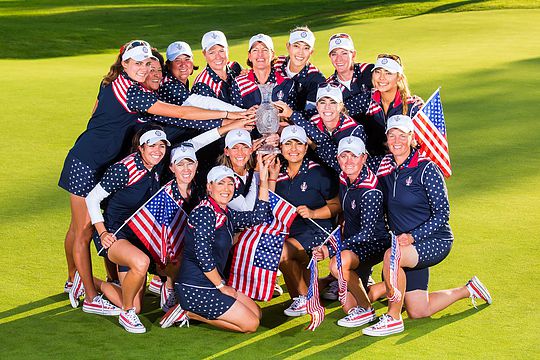 With the match between Europeans Suzann Pettersen and Charley Hull and Cup rookie Alison Lee and Brittany Lincicome tied, Lee missed an 8-footer for birdie attempt to win the 17th hole.

Thinking her two-foot return putt had been conceded, Lee scooped the ball up with her putter only to find the Europeans had technically not done so – despite the European pair and their caddies appearing to be leaving the green to head to the 18th tee.

Instead of remaining tied, the Americans lost the hole and the match to trail the Europeans 10-6 heading into the short turnaround for the singles that would decide the Cup.

The anger and tears that flowed following the fourball match weren’t restricted to the miffed Americans. Hull broke down in tears on the final green and Pettersen and team captain Carin Koch and her assistants were caught on live television in heated and animated banter on the circumstances that had just played out.

Prior to sending her players out in the Singles, American captain Juli Inkster said “It’s just B.S. as far as I’m concerned. It’s just not right, you don’t do that to your peers. It puts a dampener on the whole thing.”

“She’s been very unsporting,” Davies said of Pettersen, who was largely responsible for calling Lee on the error. “We’ve got the point but they’ve got the moral high ground. She’s let herself down and certainly let her team down. I’m so glad I’m not on that team this time.“

Despite opportunities to consider righting the ship, the result remained and the Americans were provided with an unprecedented wet sail of motivation to attempt the biggest comeback in Solheim history.

After throwing an incredible 70 birdies at their opponents, the karma-inspired comeback came to fruition with an incredible 14½ – 13½ victory to the Americans, who claimed 8½ of 12 singles points on offer.

When Anna Nordqvist had defeated America’s best player Stacy Lewis, Europe were only a ½ point away from retaining the Cup with the Gerina Piller vs Caroline Masson and Angela Stanford vs Pettersen matches looking to be the remaining contests on course that would decide the Cup.

Piller bogeyed the 17th hole to lead Masson 1-up heading up the last but was off the green in thick rough with her approach, after Masson’s ball settled 10 feet from the hole for birdie.

After Masson missed, Piller faced a putt from around 8 feet to avoid losing the hole and tying Masson, giving Europe the ½ point it needed to retain the Cup.

Instead, Piller drained the most nerve-wracking putt of her life to keep the match alive for the Americans.

“If I don’t make this, we lose,” Piller said of the crucial putt, “As much as you practice it at home or as a kid, it’s just not the same, obviously. I just can’t believe I made that putt.”

Teammate Morgan Pressel added: “Watching Gerina make that putt – the most clutch putt I’ve ever seen in my life on 18 – just sent shock waves, I think, through our whole team and also to Team Europe.”

In the end, it was captain’s pick and veteran Paula Creamer who sealed the win with victory against Sandra Gal, giving captain Juli Inkster a remarkable win for the ages.

“I think they were ready to go, but I also think (the controversy) maybe just lit the fire a little bit more.” Inkster said.