The United States has retained The Solheim Cup with a 16 ½ to 11 ½ victory over Europe at Des Moines Golf and Country Club in Iowa.

The hosts held a five-point lead going into Sunday and only needed three and a half points from the 12 singles matches, whereas Europe needed nine, but the sides shared the singles matches equally with six points each. 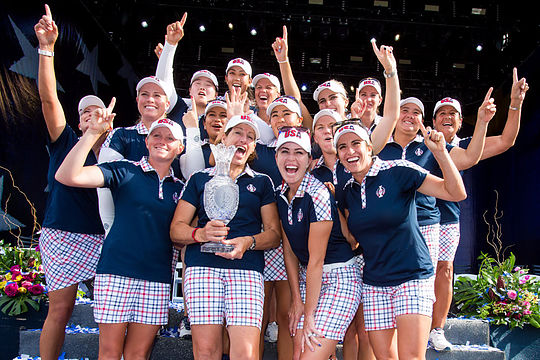 Europe came out fighting and Anna Nordqvist went four-up after four holes in the top match, but the world number two Lexi Thompson rallied and was seven-under for eight holes from the 10th.

Thompson made two eagles at the 11th and 13th and then birdied the 16th to take a one-up lead heading into the last, but Nordqvist, who had won all three of her matches despite suffering from a bout of glandular fever, fired a superb 8-iron shot up the last for a conceded birdie putt to halve the match.

Despite a European point from Catriona Matthew, who defeated Stacy Lewis 1 up to make it six wins, two losses and one half from her nine career singles matches, and another huge, 4&2 win over Michelle Wie for Caroline Masson, the momentum then swung in the American’s favour.

There were two more wins for the home side from Cristie Kerr and Paula Creamer before Angel Yin halved her match against Karine Icher to reach 13 ½ points, effectively sealing the victory, with at least a halve guaranteed from Lizette Salas.

Jodi Ewart Shadoff won the 17th to keep the match against Salas alive, but after her birdie putt on the last slipped past the hole, Salas holed a par putt from five feet to get the winning point for the United States team, taking the score to 14 ½.

There were also two more points for the United States when Gerina Piller earned a 4&2 victory over Florentyna Parker and Danielle Kang defeated Emily Kristine Pedersen by 3&1.

Juli Inkster, who became the second United States captain to achieve two victories, after Judy Rankin in 1996 and 1998, said afterwards: “I’m glad we had a lead because Europe came out firing and I knew they would, but we got the beat.”

“They just came in in good form. They came in ready to play. They knew what this golf course demanded. We had great preparation. We played loose. And we played free. We played for each other.”

She congratulated Annika Sorenstam and her team for an amazing match in Des Moines.

Sorenstam said: “We just got outplayed, there’s no doubt about it. I’m so proud how hard they fought. And it’s not easy coming out here on a Sunday with the team so far behind, but I’m proud of them. They’re out there fighting every single match, every single point. What can I say? Just congratulate the U.S.A. because they played some awesome golf.”

Despite the result, there were 12 happy faces on the European team and the praise for Sorenstam was unanimous as an ‘exceptional captain.’

The next Solheim Cup will be played at Gleneagles, Scotland, on 13th to 15th September 2019.