The United States secured the 2021 Ryder Cup on Sunday at Whistling Straits after rookie Collin Morikawa secured the final half point for a 19-9 win, the largest margin of victory in Ryder Cup history.

Heading into Sunday, the United States held the largest leading margin since 1975 with their 11-5 total. It only took five singles matches on Sunday for the Americans to capture the win. It’s also the first time the Americans have won every session in a Ryder Cup. 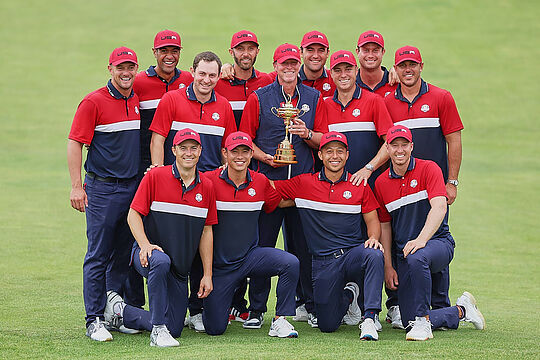 Cantlay and Morikawa were also undefeated with identical 3-0-1 records as they clearly enjoyed their rookie Ryder Cup start. Morikawa was 3-0 in team competition before tying Hovland on Sunday. His half-point got the team total to the desired 14 points, guaranteeing the US would be taking the Cup from Europe.

Dustin Johnson became the first American since Larry Nelson in 1979 to go 5-0, completing his perfect week by defeating Paul Casey, 1-up. He became the fifth player and third American behind Nelson and Arnold Palmer to win all five of his matches in a single Ryder Cup.

At 11-5 down heading into the singles matches, nobody really gave Europe serious hope of retaining the trophy. The USA had lost four of the last five Ryder Cups on home soil but they put on a spectacular display of golf, particularly their young rookies who played a pivotal role in the victory.

“This is a new era for USA golf,” said American captain Steve Stricker.

“They are young. They come with a lot of passion, a lot of energy, a lot of game. They are just so good.”

Eight of the 12 USA players are in their 20s. When the USA lost in Paris three years ago, most of the team members were still in college. Sunday’s victory sends a stern message to the European players that this is a team that’s not only in the making, but one that will take some stopping in Rome and beyond.

The final say went to Daniel Berger, who defeated Matt Fitzpatrick 1-up to close out a record victory. This was just the third time in the last 10 Ryder Cups that the USA has claimed golf’s most coveted team title.

The Ryder Cup will be played next in Italy in 2023. The USA has not won a Ryder Cup on European soil since 1993. With the performance USA put on Sunday, they will certainly take some stopping if they can produce the same dramatic golf we witnessed in Wisconsin.