Team USA has won the Walker Cup in dramatic fashion over Great Britain & Ireland with a remarkable comeback in the singles matches at Royal Liverpool on Sunday.

Beginning the final day two points behind, Team USA cut the deficit to one in the morning foursomes matches before winning eight of 10 singles matches to claim victory. 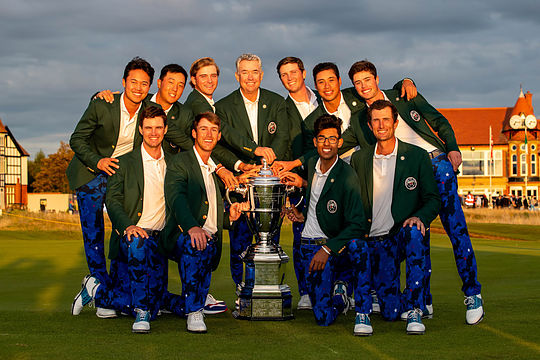 This was just America’s second away win in 24 years and their first on the British mainland since 1987.

“I am very excited,” said USA captain Nathaniel Crosby. “We were a crazy mix of personalities, but all blended well. It was almost too much fun, but after yesterday we sobered up and really focussed today, and it was an amazing afternoon.”

The Americans were led by John Pak, who finished with a 3-0 record. World No. 1 Cole Hammer struggled in the early sessions but scored a defining 6-and-5 win over Conor Purcell, and 17-year-old Akshay Bhatia and 28-year-old Stewart Hagestad tag-teamed for a Sunday morning foursomes victory before logging individual wins in the afternoon.

Hagestad defeated Harry Hall, 5&3, while Bhatia earned his second point of the day with a 4&2 victory over James Sugrue.

Entering the weekend, the Americans were clearly the superior team on paper. Half of the US team was inside the top-10 in the world – Hammer (1), Bhatia (5), Hagestad (7), Brandon Wu (8) and Steven Fisk (10). All but one of the players was ranked 21st or better. Meanwhile, the GB&I squad had just three players in the top-25.

Five members of the US team are turning pro following their stunning comeback victory on Sunday.

On the opposite side of the Atlantic just two Great Britain & Ireland players will be making the move away from the amateur ranks including Scotland’s Euan Walker and England’s Tom Sloman.

Great Britain & Ireland’s team-mate Harry Hall has chosen to contest the European Tour Q-School as an amateur where if he fails to advance he can retain his amateur status.