The USA delivered a thumping 19-11 Presidents Cup win on Sunday over a battling International team.

The Americans set themselves up for an easy Sunday by thrashing the internationals over 18 foursomes and four-ball matches, with the Internationals securing just two wins over the first three days.

USA led by 11 points following Saturday’s pairings and needed just a point on Sunday to claim a seventh straight Cup.

This year, all 12 American players were ranked inside the world’s top-30, compared to six for the Internationals, and four of the Americans are within the top-10.

Add to the mix that many have played collegiate golf together and know each other both on and off the course and this relatively young USA Team is set to become event more dominant.

“I’ve played on some close-knit teams, but this might be the closest of them all,” USA captain Steve Stricker said on Sunday. “These guys are really close, have known each other for a while and have a lot of fun together.”

“It was a fun ride. They played well all year long and they came here with a lot of confidence. They continued it right through this tournament.” 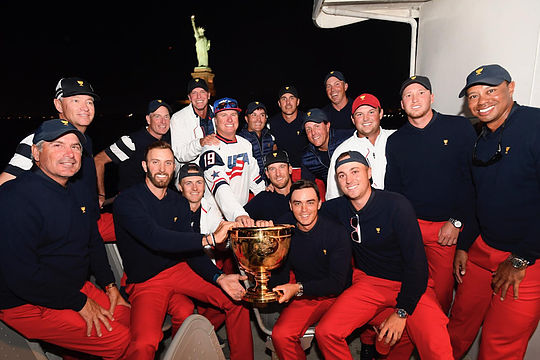 For the Americans, the week raised their already-lofty expectations for the Ryder Cup in France in 2018. The way they played and combined has sent a stern message not only to the International team, but to the Europeans, too.

Thomas Bjorn, the Europe captain will be aware that his players need to provide a proper test at Le Golf National in 12 months.

The Internationals, who won their only title back in 1998 and played to a draw in 2003, were hoping for more after a narrow defeat in South Korea two years ago. If there is any consolation, and we need to go searching for it, the Internationals managed to win six matches on Sunday and halved three.

“This team had more buzz going for it at the start of this week than any other team I’ve ever been on,” said International captain Nick Price. “We thought we had a great game plan, but unfortunately it just didn’t pan out for us.”

Nick Price is now 0-3 as the International Team captain.

Phil Mickelson and Rickie Fowler added gloss to the US score with 2&1 and 6&4 victories over Adam Hadwin and Emiliano Grillo respectively.

The USA have now won the Presidents Cup 10 times out of a possible 12.