In a surprise to no-one, the USA has won the 14th Presidents Cup, defeating the International Team by a 17½-12½ margin at Quail Hollow Club and has taken the tournament total to 12-1-1 in the biennial competition.

Team USA began the final day of singles matches with an 11-7 advantage over the International Team yet it was the visitors who got off to a strong start. 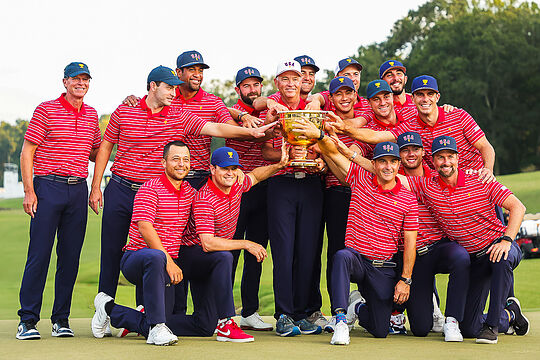 Both teams were without players who had defected to LIV Golf, but the absence clearly hurt the Internationals given Team USA still included 10 of the world’s 16 top-ranked players. With British Open Champion Cameron Smith ruled ineligible for the Internationals, Hideki Matsuyama (17) and Sungjae Im (19) were the only team member inside the world’s top-20.

Si Woo Kim accounted for Justin Thomas in a thrilling match decided at the final hole, while Sebastian Munoz defeated World No.1 Scottie Scheffler 2&1. But losses for both Australians Adam Scott and Cameron Davis against Jordan Spieth and Patrick Cantlay respectively made the task of the Internationals winning for the first time on US soil beyond reach.

Tony Finau and Xander Schauffele then prevailed in close matches against Taylor Pendrith and Corey Conners to secure the Presidents Cup for the US, who now has a collective total of 12 wins from 14 encounters, losing in 1998 at Royal Melbourne and tying in 2003 at Fancourt Hotel and Country Club in South Africa.

With the tournament already decided, Collin Morikawa and Max Homa went on to beat Mito Pereira and Tom Kim and doubling down on the crushing defeat at Quail Hollow Club.

Four players were undefeated with Jordan Spieth putting on an impressive display on 5-0-0 while rookie Max Homa posted an impressive 4-0-0 after sitting out Saturday afternoon’s four-ball session. On the other side, rookies Sebastian Munoz and Christiaan Bezuidenhout were the lone unbeaten players for the Internationals.

Three players went winless for each team, but only two failed to earn a point, and they’re both from Canada, who will play host in 2024 when the event heads to Royal Montreal Golf Club in Montreal.