The US team of Lexi Thompson, Stacy Lewis, Gerina Piller and Cristie Kerr have won the 2016 UL International Crown teams event, accumulating 13 points over the 4-day format to take the title by a point from the Korean team, with England and Chinese Taipei tied for third on 11 points.

Piller picked up the first two points of the Sunday singles session with a strong 5&3 victory over former world number one Yani Tseng of Team Chinese Taipei. 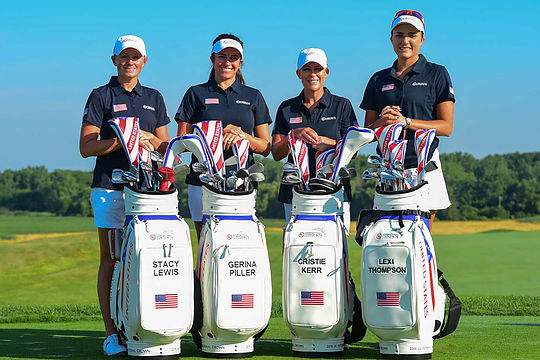 Stacy Lewis added another 2 points with a 3&2 victory over Team Japan’s Mika Miyazato. Although Lexi Thompson lost her match to So Yeon Ryu of Team Korea, Cristie Kerr sealed her match and the title for Team USA with a birdie on the 16th hole.

The Australian team of Minjee Lee, Su Oh, Karrie Webb and Rebecca Artis failed to fire throughout the week at Chicago’s Merit Club and were one of three teams who missed qualifying for the final day Singles.

All four players are now headed to England for the next Major on the women’s schedule, the Women’s British Open, to be played this year on the parkland-style Woburn Golf and Country Club north of London.

Three-time champion Webb won her first British Open title at this golf course in 1995 in a six-stroke domination of the field. She followed that up with an eight-stroke win at Sunningdale two years later, before the event was co-sanctioned with the LPGA or considered as a Major.

Korea’s Inbee Park is the defending champion following her three-stroke win at Turnberry in 2015.