No matter what word you choose, the sight of Tiger Woods in contention for victory in his first event since the events of February was truly mind-blowing. 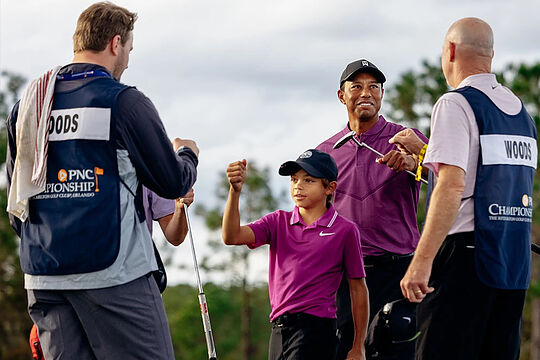 There were the doubters who questioned whether Woods would be risking too much in teeing-up despite organisers allowing the use of motorised carts.

But those who have followed Woods’ career closely know you can never doubt anything the 15-time major champion does inside the competition ropes.

Who would have thought Woods and his 12-year-old son Charlie would be coming down the last at the PNC Championship having combined for a dozen straight birdies and a chance of victory on the host Ritz Carlton course in suburban Orlando.

In the end, Team Woods came up two shots shy of forcing a play-off, signing off for a stunning 15-under par 57, five shots better than last year’s final round, to finish runner-up the double major-winning John Daly and his son, John Daly II.

The Daly’s matched Team Woods’ 57, which included a third hole eagle ’3′ and 13 birdies and winning the championship victory belt thanks to Saturday’s score of 60 compared to the Woods’ who posted a 62.

Woods was once again thrilled to have taken part and again and so proud of his son.

“We had a little run going there from the seventh”, said Woods. “It was nice. It was fun. When we played the turn, I told Charlie, I said we’re going to have to at least birdie out for at least make eight out of the nine on the back nine to have a chance. There were just too many groups that were either tied with us or ahead of us.”

“And we got on a nice heater, and as you said, we made 11 in a row, and on the last hole, we probably — we knew on the tee box that we needed three to probably get into a playoff or at least make it interesting for the Daly’s back there. Unfortunately, we didn’t chip-in and we didn’t make the putts, either.”

“But it was fun. The goals this week, two things: One, to have fun; and two, no bogeys, and we accomplished both”.

Defending champions and the Woods’ playing partners, Team Thomas, finished one back on 24-under in a share of third place alongside Team Cink.

World No.1 Nelly Korda teamed up with her former tennis pro father, Petr, to sign off on a 17-under total and outright 12th in the otherwise all-male field.