A tearful Victor Dubuisson is flying first class for the second time in three years after capturing the Turkish Airlines Open at Belek.

Dubuisson set-up his win when he birdied three of his closing four holes for a round of 66 and a total of 22-under to deny South African Jaco Van Zyl by one shot. 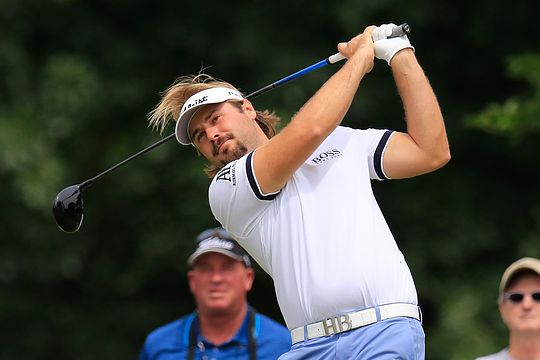 Dubuisson had just two top-10s arriving in Turkey and admitted the tearful scenes was due to a crisis of confidence for much of the season.

“It’s so hard because there were so many personal reasons why I didn’t play that much this year,” he said. “It’s not because I didn’t want to play.”

“I was really counting on this Final Series to give me some confidence back because I completely lost it a few months ago. I was just missing everything.”:

“Then I settled down and it was all about the putting.”

The Frenchman has now earned €1.953m in his three Turkish Airlines appearances as well as kick-starting his campaign to retain his Ryder Cup cap.

In fact, Dubuisson has raced to the top of the 2016 Ryder Cup points table just as he had done this time two years ago.

“With this win, I have now put myself now in a good position for the next Ryder Cup,” said Dubuisson.

“But it’s still a lot of work to do. I will definitely play more, more tournaments, to give myself a really good chance to be a part of it.”

South African Jaco Van Zyl (67) was second at 21-under par while Thailand’s Kiradech Aphibarnrat (67) was left ruing a missed tap-in birdie putt at the last that would have handed him a share of second.

Rory McIlroy went into the last round with an impressive record in his favour having won six of seven European Tour events and finished second in the other, when lying within a shot of final day lead.

However McIlroy ruined that statistic with three bogeys in a five hole run mid-round and while he birdied 13 and 15 the four-time Major winner trailed six strokes behind his Gleneagles winning team-mate.

“It’s always disappointing whenever you have a chance to win and you don’t play enough to do that,” McIlroy said.

“I’ll be going away from this tournament very disappointed with how I played today. But I’m still playing two more events this year and I feel like my game is good enough to give myself two opportunities to win again.”

“It’s not all bad. I feel like my game is in decent shape going forward. I just need to work on a couple of things and if I can get them straightened out in the next couple of weeks, I should be okay.”

McIlroy’s one comfort as he heads to Shanghai ahead of Thursday’s starting WGC – HSBC Champions event is that he has moved a further €128,075 ahead of Danny Willett in the Race to Dubai.