She’s already being hailed as women’s golf’s next big thing. 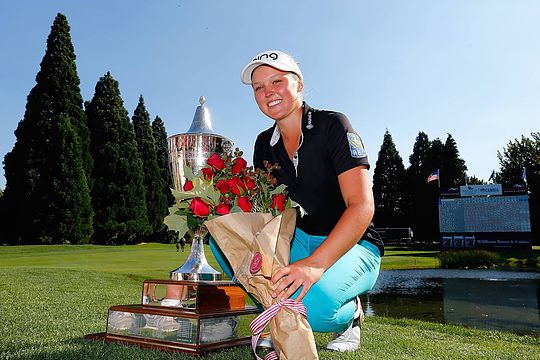 At the ripe old age of 18, Henderson has won on the richest women’s golf tour in the world, the US LPGA Tour, scoring an eight-shot victory at the Cambia Portland Classic.

Her world ranking is already an impressive 17th, ensuring she’ll be a massive drawback at the February 25-28 event.

The Ladies Masters has a reputation for unearthing champions.

Karrie Webb had her first professional start there as a teenager and since then the likes of Annika Sorenstam, Yani Tseng, Lorena Ochoa and more recently Cheyenne Woods and Lydia Ko, have cut their teeth around this Gold Coast layout.

According to tournament chairman Bob Tuohy, Henderson will be a sensation with Aussie golf fans.

“Brooke is going to be golf’s next megastar and we are delighted she is playing at RACV Royal Pines Resort,” said Tuohy.

“We have a reputation for unearthing new faces that have plenty of golfing ability.”

“Karrie Webb, for instance, played her first professional event at Royal Pines and went on to become the world’s best player.”

Henderson said she was thrilled to be playing in the event.

“This will be my first time visiting Australia and seeing the Gold Coast,” she said.

“I have heard wonderful things about the event, golf course and the resort.”

Henderson is only the third player under the age of 18 to win on the LPGA Tour after New Zealand’s Lydia Ko and American Lexi Thompson.

Regarded as an extremely creative player, Henderson reportedly has the ability to adapt her game to any golf course – especially the longer, more challenging golf courses.