The play-off was set to extend a marathon final day after storms on Thursday and Friday meant the third round had to be completed on Sunday morning. 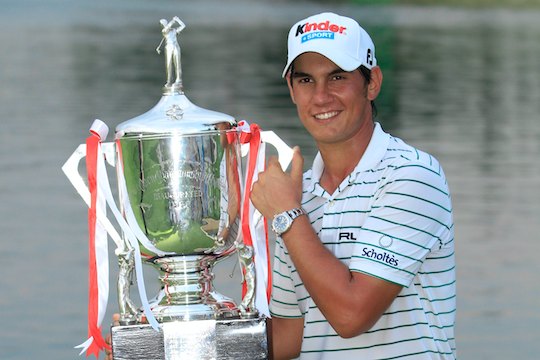 “It has been an extremely long day, the adrenaline kept me going and the playoff was just a great honour to play with Louis,” said Manassero, 19, after eagling the third extra hole with a twelve foot putt to claim the $6 million co-sanctioned event.

“It’s the first playoff of my career and it has just been amazing really. Of course to end it with an eagle was great.”

Great things were expected of Manassero after winning the 2010 Castello Masters as a 17-year-old just months after turning professional. He had earlier won the 2009 British Amateur Championship to be destined to the professional ranks.

The last few years on tour had been a struggle for Manassero following swing changes and a number of lost opportunities in events. Victory in Singapore has put amends to these disappointments.

Manassero, who in 2010 became the youngest man to make the cut at the Masters and also was crowned the European Tour’s youngest ever winner, is now also the youngest champion in the Singapore Open’s 51-year history. He is now eyeing off finishing as high as possible on the European Order of Merit.

“I have finished 31st two years in a row so I really want to get into the top 30. This year has been a little tougher for me as I am going through a few swing changes. This win has taken a little bit of the tension away and given me a little bit of freedom.”

Oosthuizen has won twice this year but he was forced to revisit the disappointment of the US Masters play-off in April, when he lost out to Bubba Watson’s famous hook shot from the trees.

He had earlier stood over a four-foot birdie putt on the second playoff hole, only to lip out with victory in his grasp over Manassero.

Almost forgotten in the mayhem was a brilliant final round six-under 65 from world number one Rory McIlroy that pushed him to third place on 10-under and secured the European Tour order-of-merit title with two events to spare.

McIlroy also emulated Luke Donald’s feat in topping the earnings standings on both the USA and European tours in the same season.

“Winning the USPGA already made it a fabulous season, but then to follow Luke Donald in becoming No 1 in both Europe and the States is the icing on the cake,” said McIIroy.

“I set myself a number of ambitious goals at the start of the year, and to have ticked so many of the boxes feels great.”

Thomas Bjorn of Denmark, who closed with a 68, finished a shot further back, and three-times Singapore Open champion Adam Scott was tied for fifth alongside Italy’s Francesco Molinari on eight-under.