While her brother Ryan was starting to make waves in the golf world, his little sister Gabi was dreaming of playing in a US Open.

The only problem was, Gabi had her eye on a US Open tennis berth. 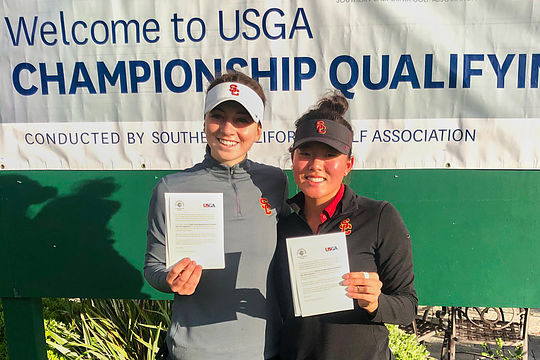 And even though tennis was her great love, she did make her mark as a 17-year-old playing state golf for Victoria.

And despite alternating between the two sports, Gabi eventually decided to head for the University of Southern California which competes in the prestigious NCAA competition in the US.

Gabi, the daughter of Australian Davis Cup legend Ray Ruffels, found she could play alright at golf as well.

Now the 19-year-old has qualified for the US Open golf championships, which will be played at the Country Club of Charleston in Southern Carolina from May 30-June 3.

Ruffels shot successive rounds of 72 at Rancho Santa Fe Golf Club to grab the second and final berth at Californian sectional qualifying and even Ruffels herself was quite stunned that her golf career had progressed at such a rapid rate.

“I only started golf about four years ago, so before that I’d always wanted to play in the US Open tennis,” said the Victorian teenager.

“I can’t believe I’ve done this in golf, instead!”

“That is completely crazy! I just never imagined this could happen.”

“Actually I was pretty nervous. There was no live scoring but I knew it was close and then I had to end up making a four-footer for bogey,” Ruffels said.

“I was really disappointed because I thought I’d need a par at worst.”

“But a bogey doesn’t seem too bad right now.”

Ruffels is a member of the Victoria Golf Club but will be joining her Trojans teammate Jennifer Chang at the Women’s Open.

And just to top it off, she has also received an invitation to compete on the Japanese women’s tour at the Ai Miyazato Suntory Ladies Open in mid-June in Hyogo.