Lone Star State golfer Jordan Spieth was the brightest star atop of the leaderboard with a new Augusta National opening 36-hole low.

Spieth, 21, walked from the Georgia golfing gem breaking by one shot a 39-year old record set by Raymond Floyd on route to capturing the 1976 Masters. 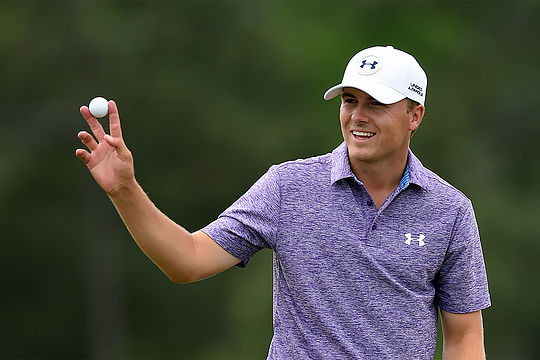 Jordan Spieth waves to the crowd on his way to a 36-hole record at the Masters (Credit: Getty Images)

And Spieth would have established an all-time Major Championship first 36-hole low had his eight-footer for birdie at the last dropped.

His 130 tally also matched the all-time opening 36 hole low in Major Championship history first set by Nick Faldo at Muirfield in 1992 and then duplicated, albeit on the par 70 Pinehurst No. 2 course, a year ago when Germany’s Martin Kaymer posted a pair of for a 10-under par 130 tally.

Spieth, with scores of 64 and a second round 66, is also now 75-under in nine events this season that included a play-off victory in the Vaspar Championship and runner-up in his last two events – Valero Texas Open and last week’s Shell Houston Open.

And after finishing joint second on debut at Augusta a year ago Spieth is 19-under par for six rounds of the Alister McKenzie designed gem.

“It’s cool and any time you can set a record here is pretty awesome,” he said.

“I’m very excited about today and the way you struck the ball. I struck it, I thought, better than yesterday. Didn’t rely on the breaks as much.

“But overall, very pleased. To have one bogey through 36 holes on this track means that I’m putting well and putting from short distances well.

“I’ve just got to keep my head down and find greens in regulation so that I can continue to have looks.”

Twelve months ago Spieth went into the final round enjoying the 54-hole lead but needs no reminding on a disappointing final day 72 and end three adrift of Bubba Watson.

“Just like I’ve said each time every day, what I learned was patience from last year,” he said

“What I learned was that the weekend of a major, those rounds can often seem like two rounds in kind of the mental stuff that’s running through your head; the stress levels, and sometimes they are higher.

“The hardest thing to do is put aside wanting to win so bad, and just kind of going through the motion and letting whatever, letting my ball striking and putting happen.

“I got off to a great start and had a chance to win last year on Sunday. I’d like to have that same opportunity this year. Again, this is only the halfway point and I’m aware of that. Not going to get ahead of myself and I’m going to try and stay in the moment and very patient these last two days and understand it’s going to feel like a whole ‘nother tournament.”

But a year on and Spieth has also been copying the winning ways of current World No. 1 Rory McIlroy Major winning 2014 season that had commenced in December 2013 with victory in the Australian Open in Sydney.

Spieth posted a blistering final round 63 in Sydney five months ago to add his name to the Australian Open trophy before then winning a week later in capturing the Tiger Woods hosted Hero World Challenge.

The quiety-spoken Dallas-born golfer has then captured a second PGA Tour title with his play-off victory in last month’s Valspar Championship at Tampa Bay.

In a distant second place and five shots adrift was fellow American Charley Hoffman but dropping a shot on 18 in a round of 68 to add to his first round 67 for a nine under par tally.

Like Spieth, it is also the 38-year old Hoffman’s second Masters but a first since the San Diego golfer had his unruly surfer like golden locks cut.

And after a pair of 11th place results the past fortnight in Texas Hoffman is up for taking to Spieth.

“I want to be in the last group with Jordan,” said Hoffman. “I mean, you’re watching one of the best players in the world play good golf right now, so you obviously can feed off him and hopefully I can try to catch him.”

And Tiger Woods had many observers choking on their words forcing his way into the top-15 in the clubhouse with four birdies and just one dropped shot in a round of 69 for a rousing return to golf and a three under par total.

It was Woods lowest score at Augusta since a final round 67 in 2011.

As well, it is the 14-time Major winner’s best score after also posting a 69 on day three of the Hero World Challenge he hosted in Orlando last December.

The Aussie challenge took a slight hit in the second round after Jason Day faltered with a 2-over 74 to fall in to a tie for 12th alongside Adam Scott, who made amends for round one with a 3-under 69.

Geoff Ogilvy sits in a tie for 29th with Queensland’s John Senden at T33 and Masters debutante Anthony Murdaca missing the weekend following a nervous second round 6-over 78.