It was the perfect finish to a marvellous amateur event.

And it could have been anyone’s day on the final day of play in the 2012 Men’s NSW Mid Amateur Championship, with just two strokes between the top three players in the final group of the day. 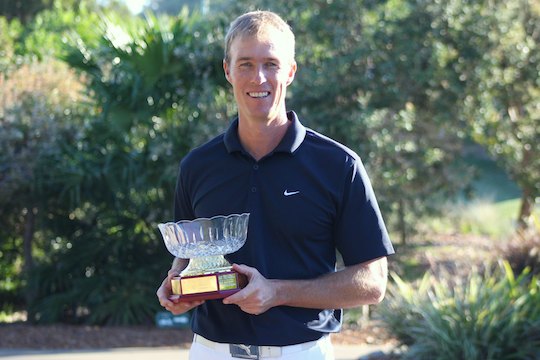 Andrew Tharle from Royal Canberra was leading overnight and managed to hold until the last putt was sunk with a total score of 231, winning by one stroke from Dunheved’s John Fearnley with a total of 232.

Brendan Ellam from North Ryde was a further one shot behind with a total of 233.

Played at Magenta Shores Golf and Country Club the course proved a challenge for many of the competitors.

Although the handicap limit for the event was 9.4, the testing layout produced some high scores over the three days’ play.

Tharle led the field early on day one, shooting a sturdy 77 off the stick. Fearnley was one behind on 78, while there were five players tied for third on 80.

The second round of 18-holes saw some great scores, with Brendan Ellam (North Ryde GC) and Michael Neaton (Rockhampton GC) both shooting rounds of three over par 75.

Rounds of 76 from Tharle and Fearnley saw them retain first and second positions respectively.

In what eventuated to be an exciting finale, Tharle and Fearnley both shot rounds of 78 over the final 18-holes, which saw Tharle secure the championship by just the one shot, to hold onto the lead he had gained after the initial round.

Ellam fired a fantastic par round of 72, which saw him take third spot. At least 100 competitors made the trek to Magenta Shores Golf and Country Club to contest the two-day event open to male amateurs between 30-54 years of age with handicaps of 9.4 or under.