The Australian Golf Club has outlasted St Michael’s to secure a place in the final of the Eric Apperly Shield following a thrilling semi-final on Sunday at Oatlands Gold Club in Sydney.

Full credit must be given to the St Michael’s lineup who pushed the well fancied Australian team right to the wire. Three matches went the full distance needing to be determined on the 18th with the final outcome of 3-3 forcing a sudden death play off. 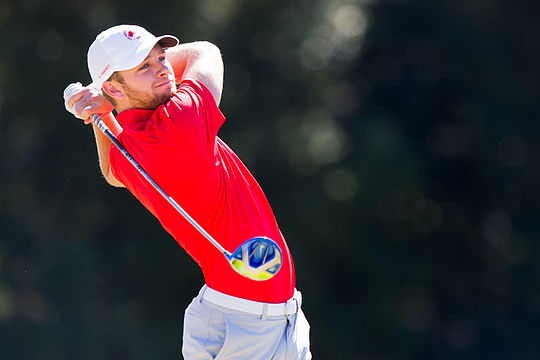 Earlier, five extra sudden death holes between Harrison Crowe from St Michael’s and Issac Noh from the Australian were required to determine their match which had both teams on the edge as the outcome of the semi-final depended on that encounter. Crowe eventually claimed the outcome with a brilliant 10-metre birdie to secure the match.

With the semi-final result locked another extra sudden death playoff was needed and it was the talented Blake Windred (pictured) who secured the win for The Australian, who had only narrowly defeated defending champions Concord in the quarter-final the week earlier in another play-off which Windred secured.

The Australian top order of Kevin Yuan and Blake Windred had earlier secured easy wins to give the Australian the edge with the outcome of the semi-final moving to the middle order matches after St Michael’s number 6, Kieron Ryan had secured a solid 4&3 win.

Full credit must be given to the St Michael’s middle order who pushed the more experienced Australian team right to the end. Aidan Powter, Luka Brucic and Harrison Crowe from St Michael’s engaged in epic battles against Lachlan Robinson,Tom Heaton and Issac Noh from the Australian, with all matches going the full 18 hole distance.

St Michael’s was undefeated leading into the finals and is a team that’s being rebuilding over the last two years under the watchful eye of NSW State Men’s coach and St Michael’s head professional, John Serhan.

Four of the six member St Michael team are 15 years of age or under and have already numerous state and junior age titles to their credit. With the Eric Apperly Shield a 21 years and under scratch match play event, this is a team to certainly watch over the coming years.

The Australian lineup have survived two tough matches in the final series after dominating their division leading into the finals. They’ve rightly earned their finals spot and they are a team that is battle hardened and will be a real threat in two week’s time at Liverpool Golf Club where the grand final is to be played.

The Australian’s opponent is yet to be determined after play in the other semi final between Pymble and ACT Monaro was suspended due to light with the score 3-2 in favour of Pymble.

The top-order match between Josh Armstrong from the ACT and Corey Jones from Pymble was still going and outcome of this match will determine if Pymble advances or if ACT Monaro can force a sudden death play off to gain a place in the grand final.