The day KJ shadowed The Shark

A Gymea real estate agent believes he might have held the key to Geoff Ogilvy’s victory in last month’s Australian Open Championship at The Lakes Golf Club in Sydney.

And Kevin Jeffree, ‘KJ’ to his mates, could not have been happier about it.

Jeffree admits his heart did more than miss a beat – it almost stopped when the telephone rang and Century 21 real estate supremo Charles Tarbey offered Kevin a spot alongside Ogilvy in the Open’s Wednesday pro-am. 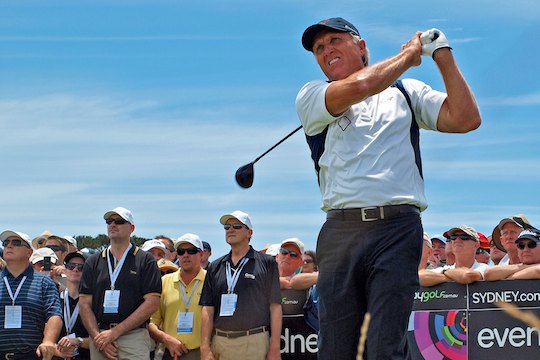 KJ watches The Shark tee off

He didn’t have to think too long and hard about it either:

“No thanks, I’d make a mess of Geoff’s game,” grinned big Kev, with a sigh of relief.

“As much as I love golf, I don’t think even Geoff is quite ready for me trying to get around The Lakes in one piece.

So Tarbey did the next best thing and offered Jeffree a day “inside the ropes” walking with none other than tournament big guns Greg Norman, Fred Couples and Stuart Appleby.

We could say that Kev managed to bring their game’s undone too.

Couples missed the cut and the two Aussie icons were never really in the hunt.

But for Kevin Jeffree it turned out to be the most enjoyable day he had ever had on a golf course and gave him an insight into just how good these guys really are.

“Just being introduced to them on the first tee and being that close to them throughout the day was one of the real highlights,” he later told The Golfer Pacific.

“Just standing so close to them and watching while they discuss with their caddies what club they are going to hit and work out their strategy for each hole.

“I tell you it opened my eyes.

“I’m not too proud to admit I still carry a piece of paper with me when I play golf that serves to remind me how far I hit each club.

“No, I didn’t feel like relaying any of that information to the Shark when he was wondering what club to hit.

“I don’t think that would have impressed him too much.”

Century 21 threw in considerable sponsorship dollars for the Australian Open and received plenty of positive publicity from the whole experience.

That included having up to eight of their managers walking inside the ropes with some of the marquis groups for each of the four days of the event.

That move proved an outstanding success and didn’t seem to bother the players at all.

Jeffree explained that the day inside the ropes was only part of the equation as he was back at The Lakes on Sunday with his partner Tammy for a day in a corporate box watching some of the best players in the world in action as Ogilvy strolled towards his impressive victory – and his first Stonehaven Cup.

“We had a day to remember – we were the first ones in the carpark and the last ones to leave – we got everything possible out of our day at the golf,” beamed Jeffree.

“Yes, there were a few beverages consumed – but we were well behaved.”

At the end of the day, if he is invited back next year and maybe offered another hit with the man who is now the defending champion, would he re-consider?

“They [the pros] play a different game to us,” he said.

“Granted I learned a lot from watching them in action but I doubt I could go out and put too much of what I saw into action for myself.

“I made a lot of friends that week and caught up with a lot of old ones as well, while I was there.

“It made me realise this is one of the great golf tournaments of the world and saw a completely different side of life.

“And I loved just being a part of the whole affair.

“You see the players on TV but they look completely different in real life, much fitter, in fact.

“We were still in the club at the end of the day’s play when Geoff Ogilvy came in, with the trophy, to do an interview for television.

“It was a nice way to finish the day and gave me a chance to point out how lucky he was – lucky he didn’t have to carry me for 18 holes in the pro-am.

“I think in the end that’s what got him home.”