The fairways are brown but don’t hit the panic button

When Eureka Earth (@EurekaEarthPlus) posted a recent aerial image of Augusta National without its immaculate green fairways and looking more like your local council course than one of the most-beloved courses in the world, the golfing world was sent into a tailspin.

Of course that isn’t hard to do these days, however, with just a month and half until the rescheduled Masters tees off, a little hysteria could easily be forgiven. 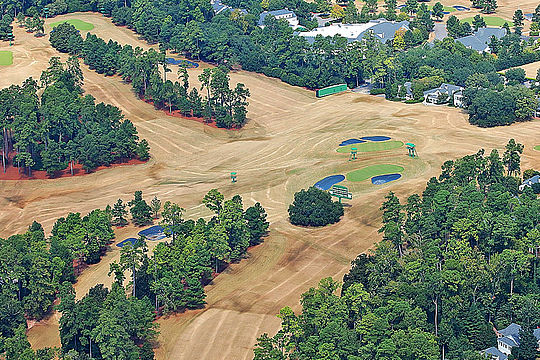 We’re used to seeing the Augusta National layout in all of its April glory. Yet the brown fairways and rough are in fact how the course looks for most of the year as the grounds staff battle with the stifling summer months and even a little snow in the Georgia winters.

In fact the course generally stays in this shape from May until October every year as preparations work towards being in tip-top shape for April.

When Rory McIlroy spoke with Michelle Wie earlier this year in a live Instagram interview for Nike Golf he thought that the change in timing might actually help with his quest to finally capture his first green jacket.

“I feel like there’s anticipation going to Augusta as the first big event of the year…there’s all this hype.”

“I don’t think it’ll feel like that this year. It’s going to be a different Masters and personally, selfishly, maybe that’s what I need to get the jacket,” said McIlroy, whose best finish at ANGC was an outright 4th place in 2015.

The 84th Masters Tournament is set to tee off on November 12 with Tiger Woods returning to defend his historic 15th major win in 2019.