The Lakes: Get serious, boys

Golf great Arnold Palmer once rated the first hole at The Lakes as one of the toughest starting holes he had ever seen on a golf course.

The great man then turned his head the other way and was moved to say:

“Heck, this 10th hole must be one of the toughest starting holes for a back nine I’ve ever seen too.” 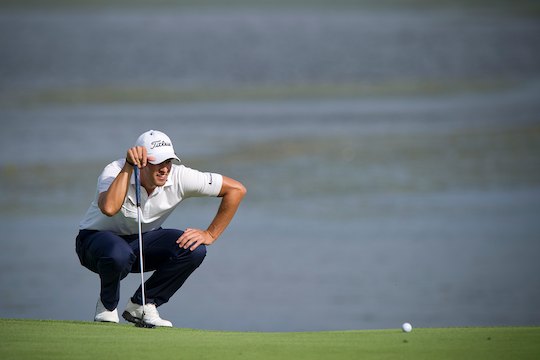 There have been some subtle changes to both holes as this famous course prepares to host this month’s Australian Open.

And long-serving teaching professional at The Lakes, Richard Flood has witnessed all the changes.

Now he has a word of warning for Greg Norman, Adam Scott, Fred Couples and the rest of the all-star field:

“Play the new-look Lakes layout without at least a couple of practise rounds there before the Open at your peril.”

Because if you arrive at this week’s Open safe in the knowledge that you have played there before ‘a few years ago’, you’ll be in for a rude shock.

The changes to the Mascot layout have been many and varied since the club commissioned high-profile Australian designer Mike Clayton and gave him carte blanche to make changes a couple of years ago.

“To arrive at The Lakes Golf Club for the 2010 Australian Open and to have your name called to the first tee and stand there looking over the water, knowing full well, that if you are going to take that corner on, it is 238m to carry it, can be quite daunting,” says Flood.

“You really need to have another couple of lines amongst your notes – for the weather conditions and wind changes here. And you have to consider there may be rain too.

“No doubt some will find the water and their chances may be gone.

“This is a great opening hole because you have to knuckle down and position your ball off this tee, bearing in mind the green on this hole has also been moved closer to the water.

Flood says the first at The Lakes is a great opening hole and the gallery will see a lot of great shots just by standing there.

“I don’t mean they’ll enjoy seeing players dunk their balls in the water,” he said.

“But there’s a lot of entertainment right here and that is what The Lakes is all about.

“A stronger mindset is needed on this new golf course.

“It’s the same layout but let me tell you, a lot has changed.

“It’s been done because this club has hosted a lot of big events and we wouldn’t have survived an Australian Open with the old golf course.

“It’s a tough golf course for members – but that’s why we have handicaps.

“Hopefully they will come out and watch these big names – but not try to do what they do.”

Of course The Lakes has a plethora of great holes.

None more famous than the par-five 14th hole, where many an Open has been won and lost.

Greg Norman himself came to grief here one year and knocked up an 11 on this hole.

“I was out here on the ground that day and watched Greg when he got into this stubborn mode where he decided he had the right club and could make the shot,” Flood said.

“He hit three in the water here and to Greg’s credit, I think he came out and next day and made a three on the hole.

“That’s why everyone loves Greg Norman.

“This hole as a huge green now. What did Paul Hogan once say in his movie ‘that’s not a knife, this is a knife’. Same deal here. That’s not a green – this is a green. And it’s a beauty.

“This is four greens almost in one.”

Flood says the pin position can make the world of difference to this hole.

“If you don’t get the second or maybe even the third shot right here, you finish up in that back trap, with a downhill like and water not far from the edge of the green.

“You hit up into the centre of the green and there is a mound in the middle, if you don’t carry that and with spin on the ball it comes all the way back down towards the water.

“We’re sitting here on a calm day – but if a wind comes up and it’s a downwind, it is going to be tough on the club selection.”

Flood says when the players arrive at The Lakes this year they have to get their game face on straight away.

“They have to tackle the serious business of getting out on the golf course and get their caddies and make a lot of notes – straight away.

“There is a lot to notes and a lot to think about.