The man who helped Koepka win a 2nd US Open title

(Shinnecock Hills, NY:) Among those persons Koepka singled out for praise soon after his Shinnecock Hills victory was the person clearly responsible for getting the two-time winner back to the pinnacle of Major Championship golf.

Earlier this year, and indeed in his very first tournament of 2018, Koepka suffered a wrist injury at the Tournament of Champions in Hawaii. 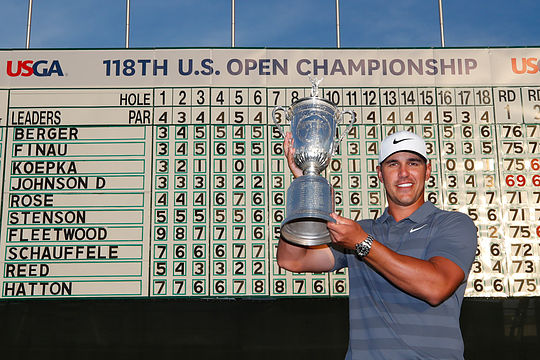 When Koepka posted an opening score of 78 it was only those close to the Florida golfer who knew something was wrong. He continued with the touranment shooting scores of 74, 78 and 75 to eventually finish in 34th or last place on 13-over par.

Now outsiders were saying something was clearly amiss with the reigning US Open champion.

Koepka had suffered a serious left-wrist injury and would be sidelined from competiton for nearly four months missing two WGC events and the Masters before returning to competition late in April.

Koepka turned to Marc Wahl, a certified physical therapist who has spent the past eight years working exclusively for professional golfers on the PGA Tour. He has travelled the United States and abroad to over 250 Tour events and worked with over 42 players.

“Marc kind of keeps me in check. He does an incredible job, ever since — I think I met him at The Open Championship, maybe 2013 and all the work he does with me, when my rib popped out, I think at Arnold Palmer, just to get me playing was incredible,” said Koepka.

“He does such a good job. He actually does take the time to really get to know your body and know how it works.”

“You know, my rib kind of came out last week. It bugged me a little bit. Right when we got here, he worked on it, knew what it was. It was pretty sore, but I had no problems since then.”

In working with Koepka and his injured wrist, Wahl worked with a science involving snapping a bone back into place where Koepka has been dealing with a tendon issue that caused him to miss so many tournaments this year.

Koepka finally returned to the Tour in late April in New Orleans but a fortnight later at The Players, Koepka aggravated his left-wrist while on the TPC Sawgrass practice range.

“I was in excruciating pain,” Koepka said in the article.

“I couldn’t get the feeling in my hand to come back at all. I thought, ‘Oh man, here we go.’ I needed to get to Marc.”

Wahl’s work saw Koepka improve from a pair of 70s and a third round 74 to then shoot a final round 63 and eventually share 11th place.

Another fortnight later and Koepke produced two 63s on route to second behind Jason Day at the Wells Fargo Championship and now after another fortnight and Koepka is a double US Open winner and the first back-to-back winner of the title in 29-years.

And all thanks to Wahl.

Wahl has long been a fan of golf, he took some courses on golf exercise as he worked to develop a new focus for himself, a process that took about a decade to develop. In the early 2000s he took a specific course with Titleist where he learned about kinematic sequence.

The best way to describe it, he explains, is when you see videos of athletes hooked up to machines that trace their movement for animation in video games. Except he’s using such a machine to help golfers guard against and navigate through injuries.

He doesn’t want to change their swing, that’s not his area of expertise, nor something he’d advise. Instead, he’s measuring through graphs a golfer’s movements and working to help them get the most out of their bodies.

His first opportunity to work with a tour regular came with Irish golfer Graeme McDowell in 2008. The pair met up in Los Angeles, where Mr. Wahl shared with the golfer what he had been working on.

“I showed the correlation between this graph and their lack of strength or range of motion of an area and I could quickly correct it because I was a manual therapist,” he said of his early work with Mr. McDowell and others. “They could see a change right away. It struck a chord with a lot of people and I started coming out more to make my manual skills useful.”

A decade later, this is entirely how Mr. Wahl makes a living, trading in the rates insurance companies reimburse health care providers for the type of compensation some of the world’s most famous athletes are willing to pay to make sure their bodies run right. This includes non-traditional practices like cupping.

Mr. Wahl focuses most of his attention on the seven pros he tours with, but also helps when other golfers have an issue. World Top 25 players Dustin Johnson, Justin Rose and Matt Kuchar have all come to him when dealing with physical issues.

“Marc could work for 15 to 20 guys if he wanted to but he likes it to be more personal though, so he can be more thorough,” said Koepka

Walker has worked with Wahl since 2010 and in winning the 201 PGA Championship he singled out Wahl for special praise.

“He worked on my neck, which is where my problem area was and he’s kept all that feeling really, really solid. It’s allowed me to go work and work hard.”

And their relationship was no more evident when Walker walked off the 18th hole at Baltusrol to be embraced by Wahl.