The Price is right at NSW Open

It was a victory a long time in the making but Aron Price’s four stroke win at the NSW Open was just as memorable as his 2008 Livermore Valley Wine Country Championship on the Nationwide Tour.

Starting the fourth round tied for the lead with Steven Bowditch, Price opened with a birdie before steady play saw him claim the title by four shots with a tournament 19-under total. 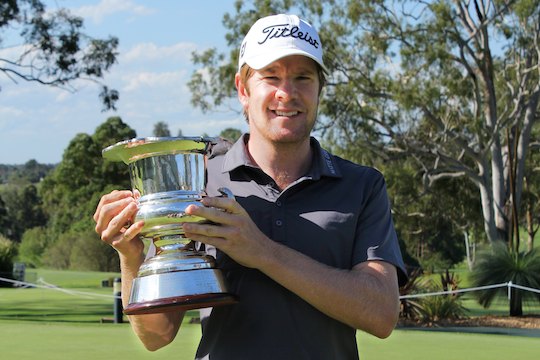 WA Open champion Jack Wilson, Aaron Townsend and Adam Bland finished in a tie for second, with Bowditch crashing with a final round 76 to finish in a tie for 7th, six off the pace.

Price picks up AU$16,500 and Official World Golf Rankings for his first win at home and more importantly a start in this week’s Australian Open.

He had returned to Australia to play the Australian PGA Championship where he finished 22nd. At the time Price had no other starts in our main events and only received a call up on the Monday before the Australian Masters that he had a start there before going onto record a top-10 result finishing 7th to bank a $26,711 cheque.

The fine result in Melbourne would prove a sign of things to come.

“I had no status here in Australia, so this win gets me into the Australian Open,” said Price.

“Today, I just played steady. A couple of times when I did get in trouble I made some great pars like on the 10th. Obviously I made four, if I had of made a five it could have spiralled into anything.”

“I had played well both at the PGA and the Aussie Masters, so I felt the game was there going into the NSW Open.”

For a guy who wanted to be a 1st Grade Rugby League player for the Cronulla Sharks, Price has done the hard yards on the world’s tours, including the PGA Tour, where he has his sights currently set to return.

Price’s 2013 season on the Web.com Tour was a mixed bag, with two top-10 finishes yet only making the cut in fourteen of the twenty-three events he played to finish 72nd in money leaders to retain playing rights but was well outside the desired top-25 who gain automatic promotion to the PGA Tour.

As an amateur in 2005, there were numerous course records, including an amazing 61 during the Western Amateur Medal at Point O Woods, draining a 7 iron on the last hole from 170 metres for an eagle 2.

There were also wins in a number of major US amateur events including the Rice Platers Amateur and the prestigious Players Amateur.

The victory on Sunday at Castle Hill has given the Florida-based Price the lift he was after. It was difficult to split who was more excited, Price or his father, Ray, who has supported his son through the highs and lows of professional sport and was on the bag at Castle Hill for the win.

Both were enjoying the moment over a quiet beer on Sunday evening at Kareela Golf Club in Sydney’s Shire area where Price first picked up a club at the age of 12, the NSW Open trophy firmly in Ray’s hands, rightly proud of his son’s achievement.