Simon Abbott took out round two of the Australian Long Drive Championships at Ballarat Golf Club in March.

The man nicknamed ‘The Tricep’ recorded a tournament-high knock of 369 metres. 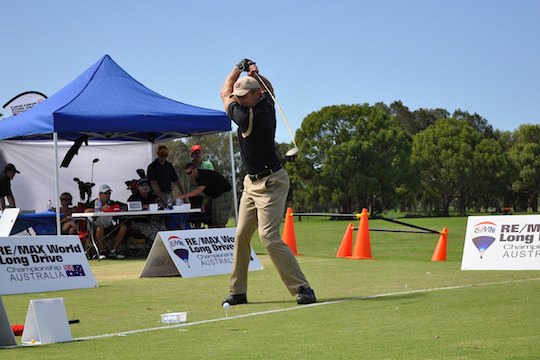 In the final heat, Abbott’s 348.5m drive was too good for opponent Stephen Kennedy who could only manage 320.2m in the final.

Abbott, 43, was eligible for the senior division but has decided to make a foray into the open division in 2011.

Kennedy’s best drive for the day was just over 361m.

Mark Bylsma finished third and the top six drivers after the heats all managed drives over 340m.

Players hit down the course’s 10th fairway, a par-five, and their drives needed to find a 36m-wide grid to be counted.

“They only really need to get one good drive down the middle and that’s the one that will count,” said event organiser Wayne Hines.

The event saw 32 long drivers from as far away as Western Australia compete in the top grade with six progressing to the quarter-finals and four to the semi-finals.

Competitors hit six balls in each round.

“It’s a complete turnaround from your normal game of golf,” he said.

“There’s music playing, there’s the commentary going the whole time while the guys are playing, the atmosphere is fantastic. There’s a lot of banter.”

Hines said that the long drivers are talented in their own right but normal club golfers can’t glean many tips for lowering their scores.

“The way these guys hit the ball is totally unorthodox,” Hines said.

“They’ve got the most wild swings you’ve ever seen in your life and they’re very, very inaccurate.”

Hines also has a number of changes in mind he would like to implement if the Championships return to Ballarat.

“We hopefully have the event back here again next year,” Hines said.

“We may even look at tying in a pro-am with the event as well. So it will be a pro-am that includes one of the long drive guys in your team, which would be pretty exciting.”

Round three will be staged at Dubbo Golf Club in New South Wales on May 21.

The season will culminate in a three-day final at the Palm Meadows Driving Range in Queensland, beginning September 16.

“There’s a great big carrot there being dangled in front of them,” Hines said.