Theegala digs deep to win Master of the Amateurs

Sahith Theegala needed to dig deep during the final round of the Australian Master of the Amateurs at Victorian Golf Club.

And that’s exactly what the American did after a shaky opening nine to win his first International title by a four stroke margin over Jang Hyun Lee from South Korea. 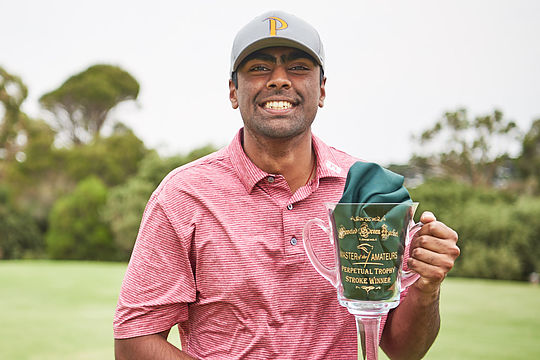 Theegala, 22, finished at 10-under-par with rounds of 66-68-69-75. The Pepperine University Senior entered the final round with a seemly unassailable five stroke lead over Australians Jack Thompson and Jack Buchanan.

Theegala opened with a birdie on the first but then he found trouble playing the next 6 holes in the equivalent of 7-over-par which included two double bogeys with a four-putt, and three bogeys.

Most players would have imploded, yet Theegala a three-time US Amateur quarter-finalist, was unfazed by seeing his overnight lead dwindle to just one stroke with Thompson making his move.

The turning point for Theegala came with his eagle 3 at the 448 metre, par-5 8th hole followed by a birdie on the next. From then on Theegala hit his straps closing the eleven holes in the equivalent of 3-under-par in challenging conditions whilst his rivals collapsed.

“That was a brutal round for me,” said Theegala afterwards.

“I somehow managed to hold it all together. The opening few holes were a disaster. I was hitting the ball well but not scoring. The eagle on eight got me back and from there I just kept on grinding. This is a fantastic result for me and a win that’s truely rememberable. All week I’ve felt relaxed being here and the course was simply pure. It’s been a great time.”

Theegala closed with a 75 in tough, windy conditions and was ecstatic with the overall result.

“This is huge for me.” he said. “This is one of the best events in the world. Even back in the States, everyone knows this event and it’s highly rated. I spoke to Matthew Wolff about it and he said go for sure so I did. I’ve had a blast and to come over here and win that, it’s up there with my best wins.”

In a reflection of the event’s international standing, nine of the top-ten finishers and ties were from outside Australia including players from Japan, England, US and South Korea.

Jack Thompson was the best of the Aussies finishing in third position at 5-under and one behind Lee. Other Aussies who made an impression included Harrison Crowe and Toby Walker, who both displayed impressive golf throughout the week with Walker a late call up two days before the event following the withdrawal of an international player through injury yet securing a top-10 finish.

This was the first of three years that Victoria Golf Club will host these championships and the recent modified alterations to the layout came up brilliantly. The greens were superb and new tees presented options for the players.

Add to the mix a list of impressive sponsors and you can see why this tournament is a blueprint for others and rightly sits as Australia’s highest ranked R&A category ‘A’ tournament.