There’s no holding back Jarrod Lyle

Jarrod Lyle putted out on the 90th hole of the USPGA Qualifying School, did a quick interview with the Golf Channel and raced to the airport.

“I flew to Los Angeles, had something to eat and then caught a flight back to Brisbane,” Lyle said of his epic journey to Coolum to play in the Australian PGA Championship. 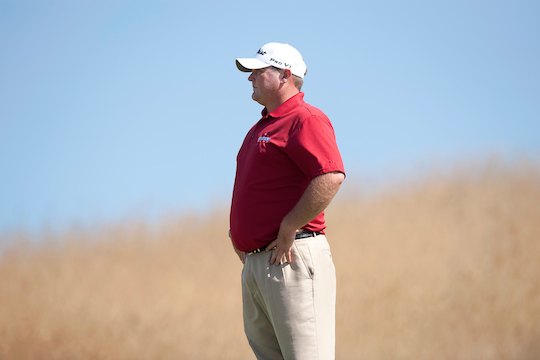 There’s no holding back Jarrod Lyle

The burly golfer from Shepparton in country Victoria had been to Q-School a few times so the nerves were not a problem on the last day.

“Those last nine holes are where you can lose your job again,” Lyle said.

“I made a double bogey on my eighth hole. Then I drove the next and made the putt for eagle.”

It was then he and his caddy decided to make it easy by simply hitting all the fairways and greens in regulation.

“I went through and played nearly the best nine holes I’ve played all week,” Lyle said before hitting off in the first round at Coolum.

Lyle, 29, said he decided to skip the last event on the USPGA Tour and instead come home to work on his game with his father, John, with a view to playing in the Australian Masters at Victoria.

“We spent time working on my putting which was the thing that left me down last year, It was a tough decision to miss The Disney (the last Tour event),” he said.

“If I played and finished second or third, I would have kept my full tour card.”

The decision to come home was vindicated. He finished fifth at the Masters and fifth at Q-School. With the top 25 players plus ties securing their cards for next season, Lyle fired a sensational 68 in his last round to finish at 15-under and in fifth place overall.

Playing on the easier Crooked Cat course, Lyle made the perfect start with a birdie on the par-five first followed by another at the sixth.

That double bogey on the par-three 8th could have been costly but he made amends immediately with an eagle at the ninth followed by two more birdies after the turn to ensure his card for 2011.

Overnight leader American Billy Mayfair shot a two-under 70 to finish the six-round event at 18-under, on stroke clear of Ben Martin (66) and William McGirt (69).

Unfortunately Lyle was the only Aussie to secure a card for next season.

Starting the final day in a tie for 27th, Victorian Luke Hickmott could only manage a round of one-over to fall back to seven-under and a tie for 36th, two shots off a spot for next year.

Hickmott finished level with fellow Aussies Gavin Coles and Mathew Goggin who both shot final round one-under 71s but it wasn’t enough.