Thailand’s Nitithorn Thippong closed with a flawless 3-under-par 69 to win the International Series Singapore at the Tanah Merah Country Club.

Thippong finished at 16-under-par for a one shot victory over Gavin Green and Phachara Khongwatmai. Australian Todd Sinnott finished the best of the Australians in a share of 5th position after carding an impressive eight-under-par closing 64 to finish at 14-under. 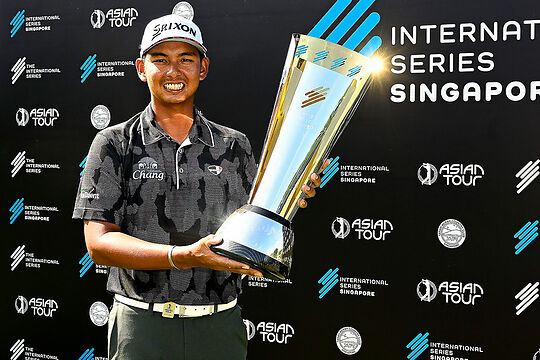 The victory was Thippong’s biggest career win to date as he pocketed US$270,000.

“I’m really (at a) loss for words with this victory. It’s my biggest win so far and I cannot describe my feeling. I was fully focused on the process and playing my own game the entire week.”

“I kept believing in myself and did not allow myself to be distracted by other pressures. I’m so happy I managed to win this week.”

Starting the round a shot behind Green, Thippong was steady in his final round, closing with a bogey-free three-under-par 69 to edge out Green, compatriot Phachara Khongwatmai and Canada’s Richard Lee. Green and Phachara both fired 71, while Lee returned a 67.

Thippong won for the first time on the Asian Tour in March at The DGC Open and is the second player this season to win twice on the Asian Tour along with American Sihwan Kim. As a tournament winner Thippong has a two-year exemption on the Asian Tour and can now pick his schedule as he wants, including this year’s elite field International Series events.

Kevin Yuan was the next best Aussie finishing in a share of 12th position, with Wade Ormsby in a share of 31st followed by Jake Higginbottom (44th) along with Brett Rumford. Scott Hend, Sam Brazel, Cory Crawford, Jed Morgan and Ben Eccles rounding out the Aussies to make the weekend but well down the leaderboard.

The Singapore tournament was part of the new International Series, which received multi-million funding from the Saudi-backed LIV Golf.