Third time lucky for Minjee at Aussie Am

It was a case of third time lucky for West Australian Minjee Lee as she took a firm hold on the title of 2013 Australian Women’s Amateur Champion. 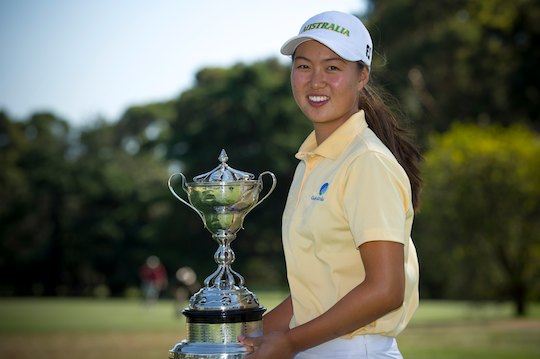 Minjee was unlucky not to win two years ago. As a 14-year-old, she lost on the 38th hole.

Last year, she was beaten in the semi-final by the eventual winner, rising New Zealand star Lydia Ko.

Jenny Lee, also 16, played well above her Australian amateur ranking of 64. Qualifying for match-play in last position 17 strokes behind Minjee, she outplayed many noted players on the way to the final.

Despite the form books, Jenny put up a good fight. From 5 down after 9 holes, she squared the match at the 17th.

After the match, Minjee recalled that moment.

”I was pretty confident all day but at that point I knew I had to play better golf to get up.”

Although Lydia Ko was in the other half of the draw, Minjee said she was relieved to see her knocked out in the second round.

“She is a tough opponent, but she is not going anywhere. I will probably meet her next week in the NSW Open!”

Minjee said that she did not feel any extra pressure from failing to win a previous final. “It’s the first big tournament and you come in with all that you have got and keep yourself in play.”

Minjee is in tier one of the National Squad and has been supported by Golf Australia for three years.

“They have supported me really well with funding overseas trips and the training camps have been great”, she said.

The next four tournaments Minjee will play are professional, including the Australian Women’s Open.

Later this year she heads to the USA to defend her 2012 US Girls’ Amateur title. A visit to the UK this year for the British Amateur in Wales may also be on the cards.

Minjee is happy to bide her time in the amateur ranks. She turns 17 in May and first base is to finish school.

The US College system may hold some attraction. Two colleges have already expressed interest in offering scholarships.

As for turning pro, the confident Minjee simply says that she will know when the time is right.