Marc Leishman has let slip a final-round lead to finish third at the Dell Technologies Championship in Boston, behind winner Justin Thomas and world No.2 Jordan Spieth.

Leishman opened brilliantly shooting 30 on the front, including six birdies, to build a two-shot lead, only to see the margin whittled away over the closing holes with five bogeys.

The Aussie had to save bogey on the 10th after an errant drive. He then three-putted from long range for bogey on the 11th to be equal leader with Thomas and Spieth. He found a bunker on the 12th for a third straight bogey. Then he closed with two bogeys to card a final round 70 to be at 13-under and four shots back behind Thomas.

Leishman’s overnight co-leader Thomas took the title after a 5-under final round took him to 17-under for a three stroke win over Spieth, who improved from two shots back at the start of the day with a four-under 67 final round.

Thomas began the PGA Tour season at No. 34 in the world and with just one PGA Tour victory to his credit. Following today’s win his tally has been raised to five victories, including his first major three weeks ago at the PGA Championship. He is No. 4 in the world, displacing Rory McIlroy who falls to No.6.

“I have two events left. I have two more opportunities to win,” said Thomas. And I’d love to make it six or seven wins.”

“I can’t say that I saw this coming. It’s not like I was like, yeah, I know I’m going to win five or six times this year. But I felt like I had the game and capability to; it just was a matter of it happening, and, you know, everything working out,” said Thomas. 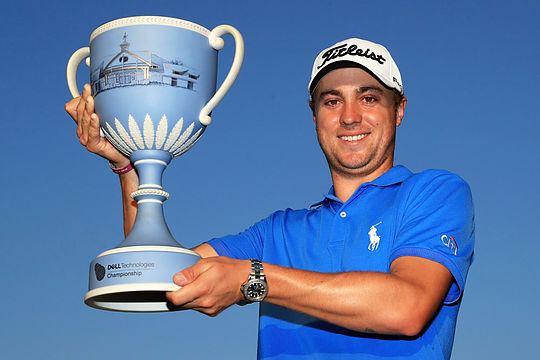 The victory also places the 24-year-old in the same company as Jack Nicklaus, Tiger Woods and Jordan Spieth as the only players since 1960 to win five times, including a major, in one season before the age of 25.

Finishing in a tie for fourth at 12-under were Paul Casey and Jon Rahm with the Spaniard satying put on fifth in the standings, while Casey cracked the top-10 and now sits at eighth.

Of the remaining Aussies, Jason Day was the next best performer finishing in a tie for 25th at 4-under with Rod Pampling last in 79th position at 9-over.

Adam Scott and Cameron Smith missed the cut and are out of the series, as is Pampling who exited finishing outside the top-70 in FedExCup season points following the recalculation.

Day and Leishman are the only remaining Aussies to advance to the next stage at the BMW Championship in two weeks time.

Several players made impressive jumps to get inside the top-70 and earn a spot at the BMW Championship, including Stewart Cink, who went from 81st to 57th thanks to a solo 12th finish at 9-under. Spain’s Rafa Cabrera Bello entered the week at 80th, and made the move to 60th thanks to a final-round six-under 65 that saw him in a tie for 18th at 7-under.

Emiliano Grillo, who finished in solo 22nd, jumped 15 spots from 77th to 62nd and will advance to the third leg for the second time in just his second year on tour.