Justin Thomas has won his third PGA Tour title of the season and his first WGC trophy on Sunday following a four-shot victory at the Bridgestone Invitational in Ohio.

Thomas fired a 1-under 69 in the WGC finale at the storied Firestone Country Club to leave fellow American Kyle Stanley in outright second on 11-under with world No.1 Dustin Johnson and Thorbjorn Olesen at 10-under following rounds of 64.

An emotional Thomas paid tribute to Australia’s Jarrod Lyle, who announced last week he was ending treatment for his third bout of acute myeloid leukaemia.

“This win, and this week, was definitely for Jarrod,” said Thomas.

“I wanted that yellow hat and I asked if we could get some, but everything in stock was sent to Jarrod, which is understandable.”

“But I was glad we could get the yellow ribbons to show some appreciation.”

Thomas’ victory on Sunday takes his PGA Tour total to nine and he now moves to number two in the world behind Johnson.

Coincidentally both players missed the cut at the Open Championship and then went on to win in their first tournaments back on home soil with Johnson claiming the Canadian Open last week.

Thomas’ first prize cheque for US$1.7 million takes his season total to over US$7.5 million. At just 25-years-old, Thomas has amassed a career total of US$24,055,706, which sees him move up to No.50 on the PGA Tour all-time moneylist. 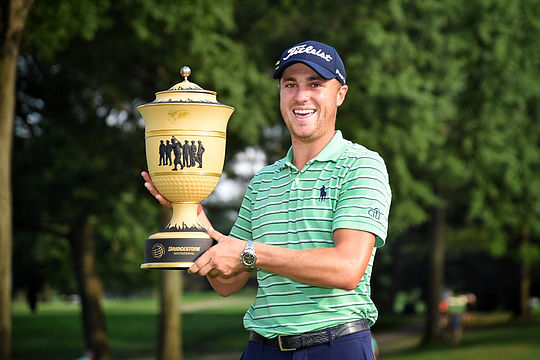 Unfortunately for eight-time champion Tiger Woods his much-hyped send off from Firestone failed to materialise. After putting himself well in contention with opening rounds of 66 and 68, the 14-time major champ carded back-to-back rounds of 3-over 73 across the weekend to slip back into equal 31st place.

“I was just trying to be as aggressive as possible and fire at everything. It was either going to be 62 or 63 or something in the mid 70s.”

“I was so far back that I had to play a great round just to get in the top‑10. Sometimes it works out, sometimes it doesn’t.”

Jason Day and Marc Leishman had their chances but both players lost their way on the back nine to see their chances evaporate. Day dropped five shots in a four-hole stretch including a double-bogey at the par 5 16th.

Day signed for a 3-over 73 to finish in a share of 10th place with Leishman another shot back in equal 14th.

The PGA Tour now moves to St. Louis for the 100th PGA Championship and what will mark the last time the major will be played in August with the tournament moving to May from next season.