So much for all the talk of a “massacre” at this year’s U.S. Open.

World No. 3 Justin Thomas’ first round five-under par 65 is the lowest round ever in a U.S. Open at the famed Long Island club. 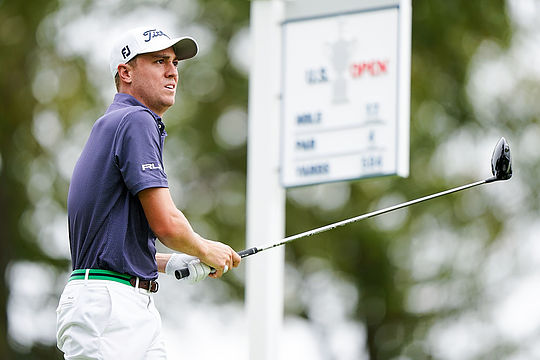 Justin Thomas tees off on day one of the 2020 US Open (Credit: USGA)

And as the aftenoon half of the first round draw took to the course there was another seven players under par on day one of the 120th staging of the U.S. Open.

Patrick Reed posted a 66, which included only the second hole-in-one of his career, to be in second place at four-under par alongside Thomas Pieters and Matthew Wolff.

Legendary amateur Bobby Jones held the record of a three-under par in the 1929 U.S. Open and the first hosting at Winged Foot.

Fellow American Larry Zielder posted a second round 68 on a par-70 layout in ‘Massacre 1’, and the staging of the 1974 U.S. Open won by Hale Irwin at seven-over and with Jack Nicklaus signing for a closing day 70.

At the 1984 U.S. Open Fuzzy Zoeller shot a second round 66 on route to defeating Greg Norman in a play-off after both players ended regulation play locked at four-under.

Then in ‘Massacre 2’ at the 2006 U.S. Open, Colin Montgomerie led the field with an opening 69 and with American Aaron Oberholser shooting the same number on day two.

Now in the very first round and 16-years on from ‘Massacre 2’, Thomas has produced the lowest score in 91-years.

Earlier this week, Thomas said this was one of his all-time favorite courses and now we know why.

“It was a good day for me from the start,” said Thomas who grabbed six birdies and had just the lone bogey.

“I’ve just played really, really solidly. Hit a lot of really quality tee shots. Only had a few squirrely ones, it felt like. The few greens I missed, I hit great bunker shots to give myself good par chances.”

“It’s one of the best rounds I’ve played in a while tee to green.”

Thomas has just one top-10 finish in five U.S. Open starts but arrived at Winged Foot brimming with confidence coming fresh off a 2019-20 season in which he earned three PGA Tour wins and finished runner-up at the Tour Championship behind Dustin Johnson.

Thomas’ playing partners weren’t quite so lucky finishing in a share of 71st place at 3-over and recent PGA champion Collin Morikawa brushing off the rust with a 6-over 76.

Adam Scott and Cameron Smith lead the way for the Aussies at 1-over and equal 33rd with Jason Day and Lucas Herbert another shot back in a share of 57th.