Defending champion Justin Thomas got off to just the start he wanted sharing the first round lead at the Sentry Tournament of Champions in Hawaii.

The 27-year-old went bogey-free for an 8-under 65 to take a last minute share of the lead alongside Harris English giving him a total of 66-under across his last 17 rounds on Kapalua’s Plantation course.

“I think I owe a big thank you to AJ (Dustin Johnson’s brother and caddie, Austin) for stepping on my ball and finding that one [buried in the long rough] for me,” said Thomas after his round.

“Those par saves can definitely be a little bit more of a momentum boost than a birdie sometimes. I’m a big fan of bogey-free rounds, so that putt was nice to keep it that way.” 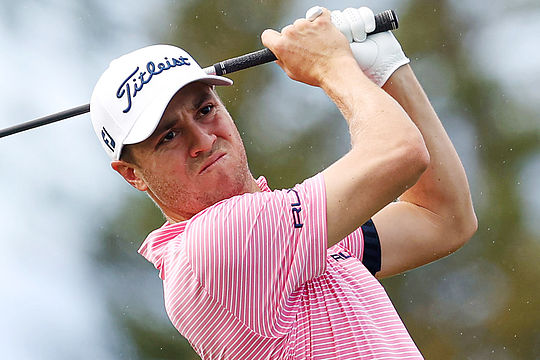 Six players lie two shots off the pace in equal third place including a surprise contender, Sergio Garcia, who is playing here for the first time since 2005 when he finished 10th behind winner, Stuart Appleby.

Leading the Aussie attack is Adam Scott, who sits in a three-way tie for 9th alongside Patrick Cantlay and Brendon Todd.

The Queenslander last teed it up at the Masters in November where he managed a share of 34th place and the former World No.1 has yet to finish inside the top-20 since taking a five-month break from the PGA Tour last season.

Marc Leishman sits four off the pace in equal 12th while Cameron Smith holds a share of 22nd another shot back.

World No.1 Dustin Johnson shook off the rust with a 2-under 71 and has plenty of work to do tomorrow if he is to get himself back up the leaderboard for the weekend.