Justin Thomas has kicked off his 2020 campaign in style defeating Patrick Reed and Xander Schauffele in the first PGA Tour tournament of the year in Hawaii.

Thomas hung on through three playoff holes to first see off Schauffele, followed by Reed with a birdie to claim his second Sentry Tournament of Champions in what were brutal conditions, even for Hawaii.

“My adrenaline is kind of wearing off, so I’m tired, I don’t know what happened,” said Thomas, who looked visibly drained by his rollercoaster win.

“I was doing everything well, and just kind of got between clubs on 17, made a great putt there for par, and then 18 was a terrible drive that left me on a steep, steep downslope and hit the wrong club, but we got lucky to where we had a chance and even more lucky that we were given more chances, and fortunate enough to get it done.” 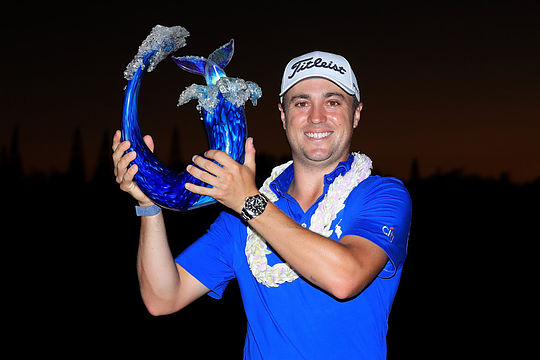 Thomas’ win, his second of the season alongside the CJ Cup in October, takes him to the top of the FedExCup standings.

The 26-year-old also joins Tiger Woods and Jack Nicklaus as the only players with 12 or more PGA Tour wins before the age of 27. Of course, Woods secured almost three times that many with 34 titles followed by Nicklaus with 20.

What’s In The Bag – Justin Thomas

Patrick Cantlay took outright fourth place at 11-under followed by Rickie Fowler and opening round leader, Joaquin Niemann, in a share of 5th place at 10-under.

The PGA Tour stays in Hawaii this week for the first regular PGA Tour event of the season at the $6,600,000 Sony Open in Honolulu where Matt Kuchar will defend his title.