Thomas became the eighth first-time major winner since 2015. Thomas started Sunday two shots behind overnight leader Kevin Kisner and one back of Chris Stroud and Matsuyama but played solid golf over the closing holes to secure his victory. 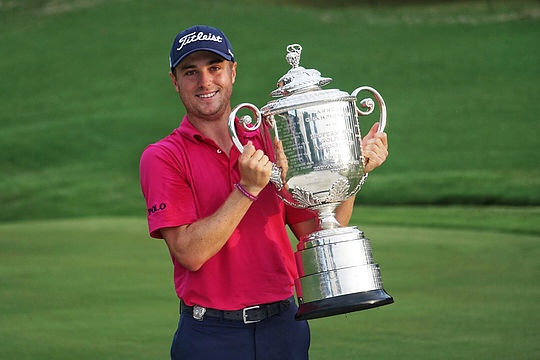 With five players still in the mix coming down the closing stretch, Thomas surged ahead after chipping in from 12 metres on the par-3 13th hole, and holding his nerve down the closing holes as his challengers faded.

“The putt on 1 was pretty big. Starting with a double there would have been pretty terrible. But even if I did — just stayed patient and knew scores were not going to be crazy low. And that chip-in on 13 was huge,” said Thomas.

Hideki Matsuyama, bidding to become the first player from Japan to win a major, appeared to recover from back-to-back bogeys with two straight birdies on the 14th and 15th holes to get within one shot of Thomas.

“The course played tough. The pins were receptive, though, more than yesterday. I was just disappointed the way I played. All I can do is just try harder next time,” said Matsuyama.

The 16th hole proved critical as Thomas nailed a 2 metre putt to give him a two shot buffer over Matsuyama before another birdie on the 17th for a three shot lead up the 18th.

Kevin Kisner was the last one who had a chance to catch Thomas but a three putt from 30 metres on the 16th for bogey proved damaging.

Kisner was not able to birdie the 17th from long range and hit his second shot into the water and finished with a double bogey seeing the 54-hole leader closing with a 74.

“I didn’t make the putts that I have been making the first two days over the weekend. A lot of misses inside of ten feet, and at some point, length is going to catch up with me. And guys hitting it 30 feet by me have an advantage if I’m not hitting putts inside ten feet.”

“I really liked the way I started out, hitting the ball solid and gave myself a lot of looks. Just not making the putts that I need to make to win major championships,” Kisner said after his round.

Matsuyama also hit into the water on the 18th and made bogey for a 72 to finish three back.

Jason Day finished as the leading Australian, his final round of 70 leaving him on a 1-under total to be tied for 9th.

Day damaged his chances of winning the final major of the year and a second PGA Championship when he took a disastrous quadruple bogey on the 18th in his third round.

Marc Leishman finished strongly with a 4-under round to tie for 14th for another solid performance in a major following on from his recent top-5 finish at last month’s Open.

The only other Australian to make the cut, Adam Scott, completed a disappointing tournament with an even-par round of 71 for an 8-over total to finish tied for 61st.