American Justin Thomas won his first Players Championship on Sunday after finishing 14-under par at the Players Stadium Course in Palm Valley, Florida.

Thomas was sitting in 22nd place and seven shots off the lead after 36 holes and still three behind England’s Lee Westwood heading into the final round, but a 64 on Saturday followed by a 68 on Sunday was enough to claim a 14th PGA Tour title and the US$2.7 million first prize cheque with a win against the strongest and deepest field in golf so far this season.

Thomas won by a single shot from Westwood, who birdied the 18th to edge ahead of playing partner Bryson DeChambeau and Brian Harman, with Paul Casey and Talor Gooch another shot back. His 64-68 tied the lowest closing 36-holes by a winner in the tournament’s history.

“It’s a huge championship, very special,” said Thomas. “It’s a tournament I’ve wanted to win, a tournament that I truly did feel like I was going to win at some point, and hopefully multiple times.”

“I felt like the last three holes on Friday changed the momentum for us for the tournament. Birdieing 16 and then that birdie on 18 was huge and getting a little bit of momentum and kind of rode that into Saturday and obviously had a great day. And then today it was about trying to get into position and then hang on from there.”

Westwood’s runner-up finish, the second consecutive near-miss for the 47-year-old, was another disappointing result. He had his chances and on the 17th three putted for bogey after finding the island green. Westwood now has 24 top-10 finishes in the four major championships and The Players, including 18 in the majors, without a victory.

If there is any consolation for Westwood in just the last three weeks, he has gone from 153rd to 22nd in the FedExCup standings and now sits inside the World Top-20. 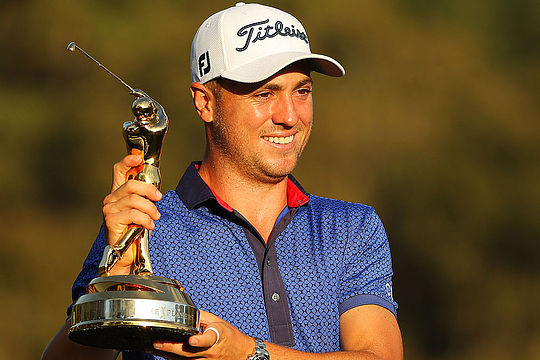 Cameron Smith finished the best of the Australians in a share of 17th position at 7-under-par, with Cameron Percy moving up the leaderboard with a final round 68 to share 29th position.

Thomas becomes only the fourth player to win a major, The Players Championship, the FedExCup and a World Golf Championships, after Tiger Woods, Henrik Stenson and Rory McIlroy, who missed the cut in the defence of his title.