An exhausted Thomas had just enough in the tank to deny Marc Leishman his 4th PGA Tour title at the CJ CUP @ NINE BRIDGES in South Korea on Sunday.

The 24-year-old battled his way to a seventh PGA Tour win and his third in Asia following back-to-back wins at the CIMB Classic in 2015-16.

“I really played some great golf after the third hole (a double-bogey 7) but it’s just such a long day with these conditions,” Thomas said.

“The wind is so strong,” Thomas said, “and because of all the trees, it bounces around and swirls so much. The gusts, when the wind picks up, when it dies, it literally makes a difference if you can make a putt or not.”

Thomas outlasted Marc Leishman with a birdie on the second hole of a sudden-death playoff after the Australian put his second shot into the water attempting to get to the green in two. 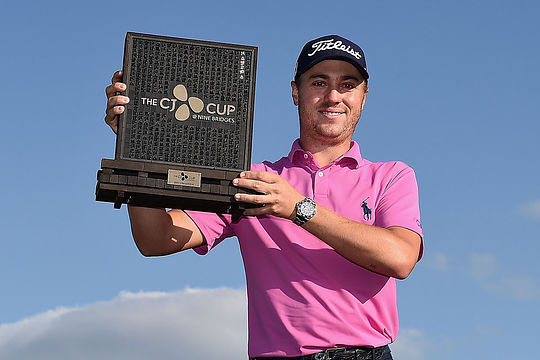 Leishman was understandably disappointed with the end result but was determined to go down fighting.

“I probably got a little bit of a lifeline on the first playoff hole and I didn’t take advantage of it,” he said.

“It was a bit of a dodgy lie. I was certainly not going to lay up. I just chunked it a little bit and goes in the water.”

“If you go down, you want to go down like that. You don’t want to go down laying up and making par. I would rather attack and try to take it. I would certainly sleep better at night just doing that,” said Leishman of his second playoff hole.

While Leishman would rather be holding a trophy on the way back home, the second place cheque for US$999,000 and a projected move to a career-high 12th on the world rankings will at least be some consolation for the Victorian, who turns 34 this week.

Queensland’s Cameron Smith, who was coming off the back of a T5 result at last week’s CIMB Classic, finished a shot out of the playoff at 8-under following a final round 70.

Jason Day was the next best of the Australians in equal 11th place at 4-under while Adam Scott finished his bogey-riddled week off with a share of 25th place – nine shots behind Thomas.