American Justin Thomas produced a sizzling final round 64 and in the process coming from four shots behind to win by four to retain his CIMB Classic title in Malaysia.

The 23-year-old American, who is now likely to move inside the top-20 on the World Rankings, capitalised on overnight leader Anirban Lahiri’s quadruple bogey nine on the par-five third hole to retake a lead he had held over the first two days. 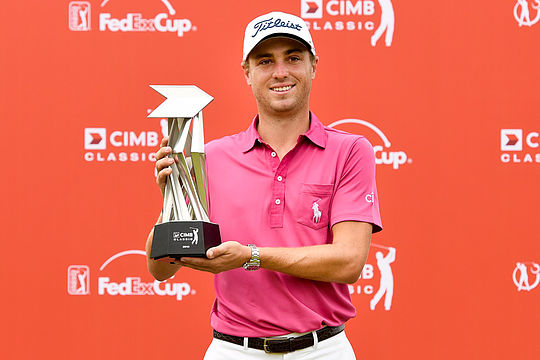 Thomas then eased clear to win by three shots with a 23-under total.

“It was obviously a fun day. It couldn’t have happened if it wasn’t for my finish yesterday. That was huge for me and put me in a good position to have a chance to win. I definitely owe a lot of it to that,” said Thomas, who earned US$1.26 million for his efforts this week.

“I was talking to Rickie (Fowler) last night and he said he had a finish on Saturday that won him the golf tournament on Sunday. You know, I felt like that was maybe the biggest five holes I’ve ever played in my life, even more so than last year, because it gave me a chance. If I’m going into today eight or nine back, I have no chance, or at least I don’t think.”

“That was just unfortunate, it really was,” said Thomas. “You never want something like that to happen. That’s one of the things that happens when you win, you get a little luckier breaks. You get fortunate. Anirban, he really played well. He hit some really good putts that didn’t go in, and there’s nothing for him to be down or upset about.”

Lahiri was searching for a maiden PGA Tour win at the TPC Kuala Lumpur course but the five-shot swing after he lodged his tee shot in a tree left the Indian with too much to do and he had to settle for a tie for third, four strokes back.

Scotland’s Russell Knox, who was tied with Thomas in second place heading to the last day, could manage just one birdie in a closing 74 and tumble to a share of 10th place at 13-under par.

Japan’s Hideki Matsuyama birdied the last two holes to sign for a 66 and claim second place on 20-under, with Lahiri (72) and American first round co-leader Derek Fathauer (67) rounding out the top four a further shot adrift.

Marc Leishman fired a final round 66 to leap into outright 5th place on 17-under and two strokes ahead of the ever-consistent Scott Hend.

2015 runner-up Adam Scott closed alongside Aaron Baddeley on 13-under and equal 10th.

The US$7 million (S$9.76 million) limited field event, the second on the 2017 PGA Tour calendar, is co-sanctioned by the Asian Tour.