While the Twitterverse was busy following the Koepka vs DeChambeau dust up, Justin Thomas was doing his part to help bring back some good vibes to the PGA Tour.

During the recent Charles Schwab Challenge, the 14-time PGA Tour winner was spotted handing over a cheque, yes they still have those in the US it seems, to mini-tour journeyman Mike Visacki. 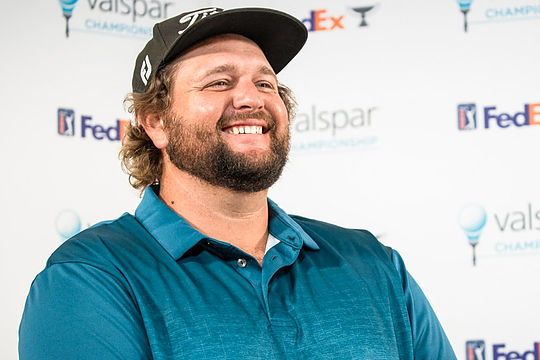 Who is Michael Visacki, you ask?

The 27-year-old has worked hard over the past six years at achieving his goal of playing on the PGA Tour, slogging it out on the US mini-tours, where he was a prolific winner but even then it was an ongoing struggle to balance the books with hotels, petrol, food and entry fees eating up most of the prize money.

So when he successfully came through a Monday qualifier to play in the recent Valspar Championship, and was subsequently filmed making a tearful phone call to his parents to share the good news, Visacki became an overnight viral sensation.

Unfortunately he missed the cut that week but was offered a sponsor’s exemption into last week’s Charles Schwab Challenge where he missed the weekend again.

While he might have had his 15 minutes of fame, Justin Thomas obviously think differently.

Both Thomas and Visacki are keeping quiet about the amount but at this stage of his career, Visacki will be more than happy with whatever the World No. 2 has to offer I’m sure.

And with JT getting involved, the sponsors exemptions are sure to keep flowing…the Americans love a feel-good story.