It’s been three long years between Ryder Cups. So what better way to open proceedings with the pairings of Justin Thomas and Jordan Spieth up against Spanish duo, Sergio Garcia and World No.1 Jon Rahm.

The teams will play the alternate shot format in the first session of the tournament. As the name suggests, this involves the use of one ball between the two players, with each person taking turns to hit the ball. The lowest score wins the hole. 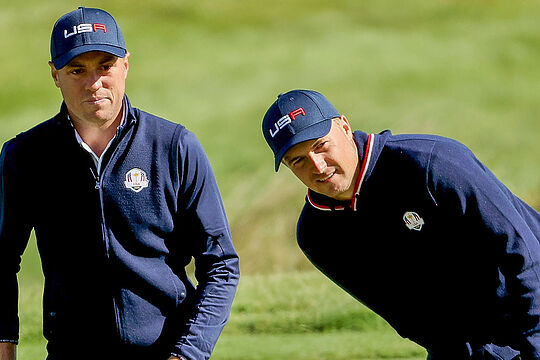 Prior to the 2006 Ryder Cup, one player could have been at a disadvantage as a decision had to be made as to which brand and model was used for the entire match. So if you’re rookie Daniel Berger teamed with Brooks Koepka, have a guess whose ball is going to be in play?

That all changed in 2006 when the rule was amended to allow balls to be switched after each hole.

Spieth, who has enjoyed a return to form this season, is confident his team can secure an early win against the Spaniards.

“I feel Stricks has instilled a lot of confidence in me and Justin, we weren’t sure where he was going to put us until this afternoon and very excited to go out and try to set the pace for rest of the team,” said Spieth.

Rahm added: “I’m physically ready for it. I know I don’t look like it but I train every day when I’m at home, believe it or not. I’m in really good shape.”

“I have no problem walking 36. I feel like the biggest challenge in an event like this is possibly five rounds of the mental aspect of it, and that’s where I think you need to learn to really unwind quickly and get ready when you need to.”