Justin Thomas couldn’t match his third round 61 heroics at the BMW Championship this morning but he did more than enough to get the job done.

A final round 4-under 68 was all he needed to keep Patrick Cantlay and Hideki Matsuyama in the rear-vision mirror and claim his 10th PGA Tour victory.

“I just kept telling myself I was beating everything by 6 through three rounds with a very mediocre Friday. I felt I was playing better than everybody else and I felt that I was good enough I was going to be just fine,” said Thomas.

“If I have a 2 shot lead with 8 holes left I feel confident I can pull it off.”

His first win of the season sees him move to the top of the FedEx Cup table heading to the season finale at the Tour Championship later this week and just two years after winning the FedEx Cup in 2017.

Despite a lacklustre backend to his season, Thomas’ red-hot form earlier this year with a 3rd place at the Sentry Tournament of Champions and Phoenix Open and a second at the Genesis Open set him up nicely for a run at golf’s richest prize.

The new World No.5 kicked off his Sunday round with a six-shot lead and stayed that way until the 7th hole despite a nervous bogey at his first hole. However, by the 10th hole it was Patrick Cantley, who had reduced the lead to just two shots with eight holes to play.

Thomas responded brilliantly with birdies at the 11th, 13th, 15th and 18th holes to win by three shots over Cantlay, who also moved four spots up on the FedExCup leaderboard to second place. 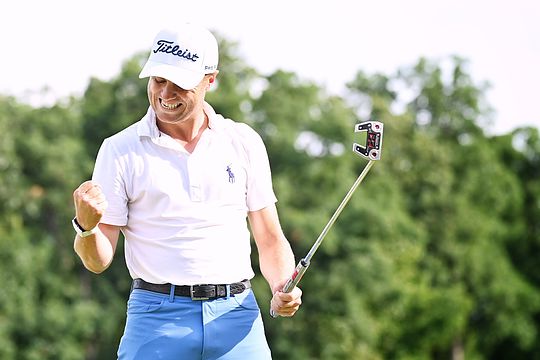 Another two shots back was Japan’s Hideki Matsuyama, who recovered superbly from his disappointing third round 73 to post his second 9-under 63 of the week and move into 15th place in the FedExCup, up from 33rd.

Adam Scott finished the best of the Australians in a tie for 9th place with Marc Leishman in equal 19th. Both players will be in the field at this week’s Tour Championship at 13th and 21st respectively.

Jason Day’s woes continued with the Queenslander falling into a tie for 52nd following a final round 74, which left him at 54th place and well out of contention for the FedEx Cup race.

“I would say below average. Very disappointing that I didn’t make the Tour Championship but it happens. Looking forward to taking some time off, though,” said Day when asked about his season.

Two-time FedExCup winner Tiger Woods looked like he might pull off a miracle after his third round 5-under 67, however it wasn’t to be and a final round even-par 72 saw his season end in 42nd place.

“Very special to win my 15th Major and get my fifth jacket. Those are special moments and be able to have an opportunity like that, and the rest of the tournaments I didn’t really play as well as I wanted to but at the end of the day, I’m the one with the green jacket,” said Woods about his comeback season.

“I think right now the most important thing is fitness for sure.”

“Keep going the way I’m going right now because I need to get a little bit stronger in certain body parts. Activate different areas. I need to get those parts stronger for sure and then starting building up my game for Japan (Zoho Championship).”