No lead is safe in a major championship, just ask Greg Norman. And Chile’s Mito Pereira found that out the hard way today following Justin Thomas’ stunning three-hole playoff victory over Will Zalatoris in the PGA Championship at Southern Hills.

Pereira, who was playing in just his second major championship and first season on the PGA Tour, stood on the 18th tee with a one-shot lead. However a mistimed driver saw his ball sail into the creek lining the fairway resulting in a double-bogey six to finish one-shot out of the playoff on 4-under.

“I just played it through and actually had a one-shot lead on 18, and that was pretty good, and sad to hit it in the water. I mean, I wish I could do it again. Just got to learn how to do it better. “

Thomas, meanwhile also looked to have ended his chances of a second major and PGA Championship title with a 4-over 74 on Saturday before a 3-under 67, the equal round of the day, saw the new World No.5 rallying from seven-shots down and into a two-man playoff.

“[Bones] did an unbelievable job of keeping me in the moment and keeping me patient today, and yeah, it just is an unbelievable team win for all of us,” said Thomas of his caddie, Jim Mackay, who spent 25 years on the bag for Phil Mickelson. 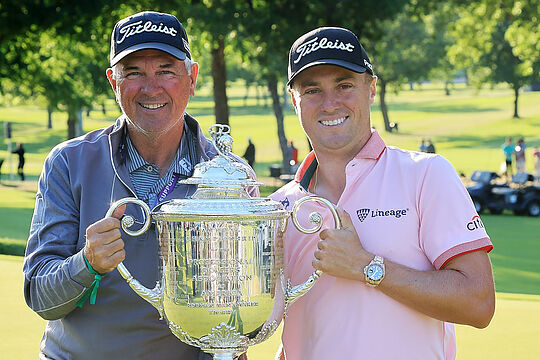 Today’s victory was Thomas’ first in 14 months since winning the Players Championship in March last year and takes his PGA Tour total to 15.

For Will Zalatoris it was another case of so near and yet so far. The Californian now has two runner-up and five top-8 finishes in eight major starts. He famously finished second behind Hideki Matsuyama in his Masters debut in 2021.

“There’s only four a year…and I think it’s been a dream of mine to win a major since I was a little kid. I’m pretty excited where my game is at for sure and like I said earlier, I know I’m going to get one. Just a matter of time.”

Sadly Tiger Woods’ return to golf looks in jeopardy, at least in the near-term, following his withdrawal from the PGA Championship. Clearly in pain, the former World No.1 pulled the plug on his week after a 9-over 79 left him in a share of last place after Saturday’s round.

At this stage it would seem likely that we won’t see him on course again until he begins to warm-up for the Open Championship in mid-July.

Cameron Smith and Lucas Herbert led the way for the Aussies finishing in a share of 13th place and even par. Marc Leishman (T34), Cam Davis (T48) and Jason Day (T55) were the last to make it through to Saturday.