American Curtis Thompson birdied his final hole to edge Will Zalatoris and Jimmy Stanger by one stroke to win the Evans Scholars Championship on the Korn Ferry Tour.

Thompson fired rounds of 68, 65, and 68 to hold a three-stroke lead after 54 holes at 15-under par. He started his Sunday round with back-to-back bogeys but he kept it together from there to card birdies on Nos. 5 & 7, both par 5s, to close out the front nine at even par 36. 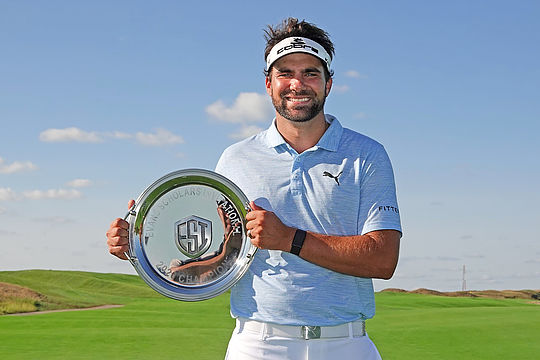 It was an emotional victory for Thompson, brother of 11-time LPGA Tour winner Lexi Thompson, who in is six years as a professional had posted just eight top-10 finishes in 103 career starts on the Korn Ferry Tour.

Two years ago, Thompson had also given the game away following a terrible 2018 season where he lost his card and started caddying for his sister.

Thompson returned to professional golf last August after finishing his degree and made a run to the final stage of the Korn Ferry Q-School, where he shared medallist honours with Braden Thornberry to regain his playing rights.

Previously Thompson played for Louisiana State University from 2011-14 and graduated with his degree in business in August 2020. With Sunday’s win he moves from 52nd to 12th in the Standings.

Brett Drewitt backed up last week’s win on the Korn Ferry Tour with a top-20 result finishing in a share of 16th position to be the best of the Australians. Drewitt remains the highest ranked Australian in the Standings, currently at 19th.

Jamie Arnold finished in a share of 58th position to be the last of the Aussies to make the weekend.

Ryan Ruffels, Harrison Endycott, Brett Coletta and Curtis Luck missed the weekend. It was a costly result for Luck who moved back outside the top-25 in the Standings to 26th. Ruffles also moved back from 48th to 51st position.

The next event on the Korn Ferry Tour is the Wichita Open starting 24th September.