With an eye ahead to next week’s Women’s British Open at Turnberry, American Lexi Thompson played her way into major championship form by capturing the fifth title of her young career at the 2015 Meijer LPGA Classic in Grand Rapids, Michigan.

Thompson fired eight birdies in a final round 65 to finish at 18-under for the week for a one-shot victory from overnight leader Lizette Salas and Gerina Piller. 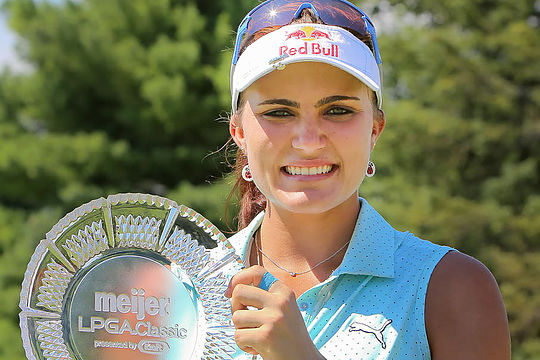 “It feels amazing,” Thompson said. “It still hasn’t really hit me yet because everything happened so fast. But it was a great day out there and we had perfect weather for it, so couldn’t ask for anything more.”

“It’s definitely momentum going into the next week being a major and going over to the British Open.”

Piller cut a swathe through the field with a final-round 64 to finish at 17-under par alongside Salas, who shot a final round 70.

Victoria’s Sarah Jane Smith enjoyed a solid week in what has been a lean season to date, to be the best of the Australians. Smith saved her best round of the week until Sunday with a four-under 67 elevating her to a tie for 16th at 8-under par.

After a brilliant 7-under 64 in the opening round, Katherine Kirk couldn’t keep the momentum going and slipped back to finish at 1-under, tied for 62nd.