American Michael Thompson birdied two of the last three holes Sunday for a 4-under 67 and a two-stroke victory, for his second PGA Tour win in seven years.

It secures him a spot on the PGA Tour for the next two years, a tee-time in this week’s World Golf Championships-FedEx St. Jude Invitational, the PGA Championship, the US Open in September, next year’s Players Championship and next year’s Masters.

Fellow American Adam Long took outright second place with a final round 64. Richy Werenski, who had the 18-hole lead and shared it with Thompson after both Friday and Saturday, shot a 70 for his worst round of the tournament and settled for a nine-way tie for third three strokes back.

Thompson, 35, finished at 19-under for the victory, with his best previous finish in this stop-start 2020 season a tie for eighth at the Travelers Championship in Connecticut, and he missed the cut in his last start at the Workday Charity Open in Ohio just two weeks ago.

“It means so much to get a win, and it gets you into so many different tournaments and solidifies your job for two more years,” said an elated Thompson. 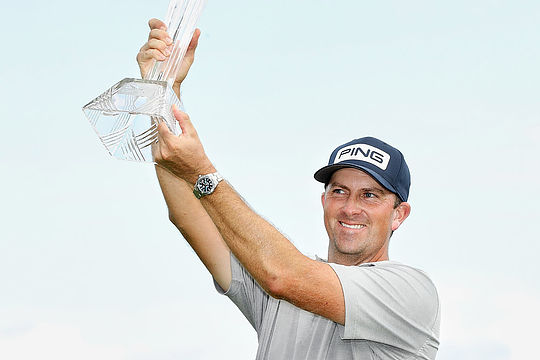 “This is definitely a win for everybody who supported me throughout the years. It doesn’t diminish the excitement. It solidifies kind of my presence on the PGA Tour and proves to my peers that I’m a threat every week.”

Thompson turned professional after playing his collegiate golf out of the University of Alabama where he majored in Accounting. He joined the PGA Tour in 2011 and his previous PGA Tour win was at the 2013 Honda Classic. As an amateur, Thompson was a member of the 2008 Palmer Cup team.

Cameron Davis was the best of the Australians finishing in a share of 12th position at 14-under, five strokes behind Thompson. Aaron Baddeley recorded a top-25 result sharing 23rd position at 12-under as the only other Aussie to make the cut.

With just three weeks remaining before the top-125 players make the FedExCup Playoffs, it was a big week for many players. Thompson moved 112 positions from 151st to 39th, which gives him a realistic shot at getting to the TOUR Championship where the final 30 players do battle for the FedExCup and $15 million.

Justin Thomas heads the rankings with a win and a runner-up finish along with seven top-15 finishes in his last 10 starts while Webb Simpson sits in second place.

Thomas won the FedExCup’s BMW Championship last year and was looking in prime position to take the year-end honours before getting gazumped by a rampaging Rory McIlroy at the 2019 Tour Championship.