Thailand’s popular Thongchai Jaidee drew on the support of his Bavarian-born coach to drive off with a seventh European Tour victory takeaway after posting a flawless final round 67 for a 17-under par success at the Porsche European Open on the (Franz) Beckenbaurer course at Bad Griesbach.

England’s Graeme Storm maintained the most substantial challenge, but found water off the 17th tee and, although he managed to save par from ten feet at the last, Jaidee clung on with a neat up-and-down at the 18th. 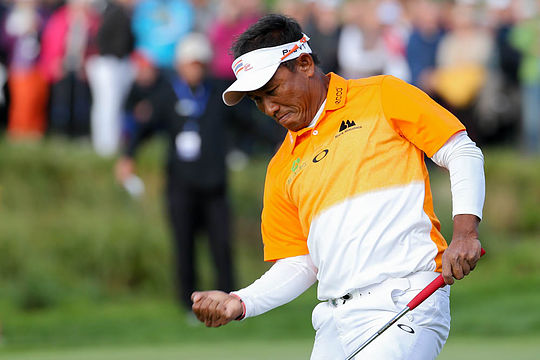 “It’s a very special week for me as it is the third time I have won outside of Asia, so I’m very excited about that and I’m happy to win this tournament,” he said

“I’m feeling very confident at the moment. I didn’t make many mistakes this week – only one bogey all week. I played very nicely and 17 under is some score for me.

The victory takes former paratrooper Jaidee into the top ten on The Race to Dubai and within touching distance of the top 30 in the Official World Golf Ranking, and allied with Kiradech Aphibarnrat’s success in China and at the Saltire Paul Lawrie Match Play, means Thai-born golfers have won three European Tour events in a season for the first time.

Scott Hend fired a final round 65 to finish the best of the Australians this week in Germany. Hend closed out the tournament in outright 4th at 13-under to take home a cheque for €100,000.

Richard Green continued hos solid run of form to finish in equal 12th place at 10-under.